Implementing the Schoof-Elkies-Atkin Algorithm with NTL 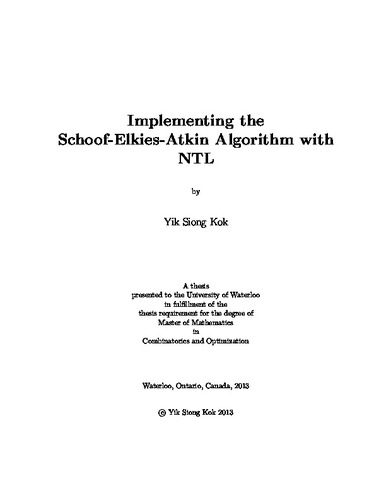 In elliptic curve cryptography, cryptosystems are based on an additive subgroup of an elliptic curve defined over a finite field, and the hardness of the Elliptic Curve Discrete Logarithm Problem is dependent on the order of this subgroup. In particular, we often want to find a subgroup with large prime order. Hence when finding a suitable curve for cryptography, counting the number of points on the curve is an essential step in determining its security. In 1985, René Schoof proposed the first deterministic polynomial-time algorithm for point counting on elliptic curves over finite fields. The algorithm was improved by Noam Elkies and Oliver Atkin, resulting in an algorithm which is sufficiently fast for practical purposes. The enhancements leveraged the arithmetic properties of the l-th classical modular polynomial, where l- is either an Elkies or Atkin prime. As the Match-Sort algorithm relating to Atkin primes runs in exponential time, it is eschewed in common practice. In this thesis, I will discuss my implementation of the Schoof-Elkies-Atkin algorithm in C++, which makes use of the NTL package. The implementation also supports the computation of classical modular polynomials via isogeny volcanoes, based on the methods proposed recently by Bröker, Lauter and Sutherland. Existing complexity analysis of the Schoof-Elkies-Atkin algorithm focuses on its asymptotic performance. As such, there is no estimate of the actual impact of the Match-Sort algorithm on the running time of the Schoof-Elkies-Atkin algorithm for elliptic curves defined over prime fields of cryptographic sizes. I will provide rudimentary estimates for the largest Elkies or Atkin prime used, and discuss the variants of the Schoof-Elkies-Atkin algorithm using their run-time performances. The running times of the SEA variants supports the use Atkin primes for prime fields of sizes up to 256 bits. At this size, the selective use of Atkin primes runs in half the time of the Elkies-only variant on average. This suggests that Atkin primes should be used in point counting on elliptic curves of cryptographic sizes.