Against the Grain: Globalization and Agricultural Subsidies in Canada and the United States 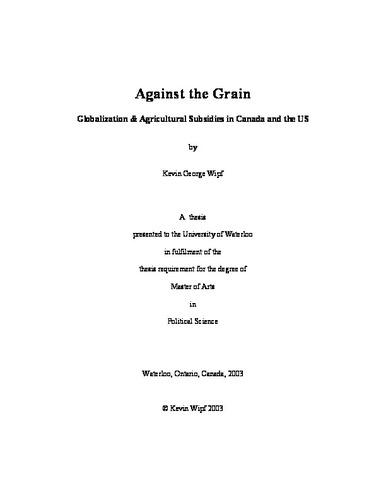 This thesis investigates whether developments associated with globalization and regional integration have caused the levels of government support provided to agricultural producers in Canada and the United States to converge in a downward direction. The literature is sharply divided as to whether governments retain the ability to pursue an independent agricultural policy course. To shed light on this debate, the levels of government assistance payments made to farmers in six contiguous Canadian provinces and American states (Manitoba, Saskatchewan, Alberta, North Dakota, South Dakota, and Montana) are compared over the 1990-2001 period. This time-frame allows for sufficient periods both before and after the establishment of NAFTA and the WTO to study the effects of these developments on the relevant policy outcomes. After outlining the programs and policy changes that drove the shifts in levels of government support provided to farmers, the paper argues that although the levels of government payments made to farmers in the six sub-units converged in the mid-1990s, they diverged thereafter. The evidence drawn from this examination supports the contention that governments do possess considerable room to manoeuvre in the agricultural policy making arena and significant ability to chart an independent policy course.

Kevin Wipf (2003). Against the Grain: Globalization and Agricultural Subsidies in Canada and the United States. UWSpace. http://hdl.handle.net/10012/748