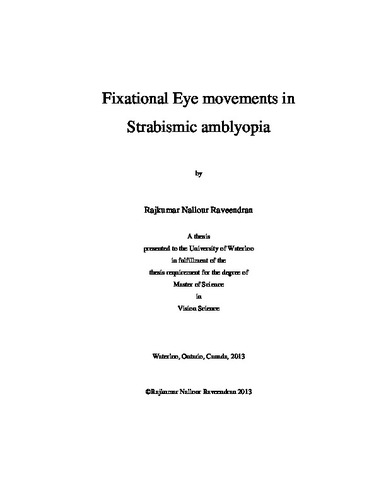 Purpose: To test the hypothesis that the fixational stability (FS) of the amblyopic eye (AME) in strabismics will improve when binocular integration is enhanced through ocular alignment and inter-ocular suppression is attenuated by reducing the contrast to the fellow eye (FFE). Methods: 7 strabismic amblyopes (age: 30.8±9.7 yrs) (5 esotropes and 2 exotrope) (VA: AME=0.50±0.30; FFE=-0.12±0.04) showing clinical characteristics of central suppression were recruited. Suppression was then attenuated by a balance point procedure where the contrast to the FFE was reduced in order to maximize binocular integration during a global motion task (GMT) (Baker, 2007). In one case the balance point could not be determined, and the participant was excluded. Ocular alignment was established with a haploscope. Participants dichoptically viewed similar targets [a cross (2.3°) surrounded by a square (11.3°) visual angle] set at 40cm. Target contrasts presented to each eye were either equal (EQ) or attenuated in the FFE (UNEQ) by an amount defined by the GMT. FS was measured over a 5 min period (Viewpoint® Eye Tracker, Arrington Research) and quantified using bivariate contour ellipse areas (BCEA) in four different binocular conditions; unaligned/EQ, unaligned/UNEQ, aligned/EQ and aligned/UNEQ. FS was also measured in 6 control subjects (Age: 25.3±4 yrs; VA: -0.1±0.08). Results: Alignment of the AME was transient and lasting between 30 to 80 seconds. Accordingly, FS was analyzed over the first 30 seconds using repeated measures ANOVA. Post hoc analysis revealed that for the amblyopic subjects, the FS of the AME was significantly improved in aligned/EQ (p=0.015) and aligned/UNEQ (p=0.001). FS of FFE was not different statistically across conditions. BCEA(FFE) & BCEA(AME) were then averaged for each amblyope in the 4 conditions and compared with normals. This averaged BCEA (reduced FS) was significantly greater (p=0.0205) in amblyopes compared to controls except in the case of alignment coupled with reduced suppression (aligned/UNEQ) (p=0.1232). Conclusion: Fixation stability in the amblyopic eye of strabismics appears to improve directly with the degree of binocular integration. The hypothesis is therefore retained.