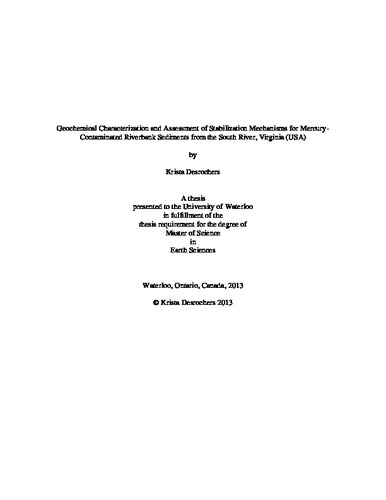 Elevated concentrations of mercury (Hg) in aquatic systems can be a threat to ecosystems and human health. Mercury-bearing sediment particles from eroding riverbanks can be an ongoing source of bioavailable Hg to aquatic ecosystems. Hyporheic zones in particular can be important sources of both inorganic and organic-complexed Hg, which can be rapidly transported to adjacent surface waters. The objective of this study was to investigate the release and treatment of dissolved and particle-bound Hg in water derived from the riverbank sediments of the South River, Virginia. The solid-phase forms of Hg in riverbank sediment samples were characterized by sequential extraction and synchrotron based techniques. The analyses suggest that 79-93% of Hg in the sediment samples is in the form of insoluble sulfides (βHgS metacinnabar); however significant masses of more-soluble Hg phases (0.4-33 μg/g) are also present. Simulated erosion events resulted in elevated concentrations of Hg in the river water up to 80 μg/L. There was no correlation between the mass of water-soluble Hg in the sediment and the concentrations of Hg released in the river water following sediment suspension. Column transport experiments were conducted to assess Hg release from the sediment under water:sediment ratios typical of those that might occur at the bottom or in the banks of the river. Concentrations of Hg in the 0.45 μm-filtered fraction of the effluent varied from 0.15 μg/L for samples collected from the base of the riverbank to 8 μg/L for samples collected from the top of the riverbank. Filter size-fractionation of water column effluent suggested approximately 50% of the leached Hg was present in the dissolved phase, with the remainder in particulate form. Riverbank sediments were amended with various types of reactive material including complexing agents, reductants and charcoals. Batch experiments indicate that the mass of Hg released from the sediment could be lessened by 64-99% with the addition of reactive media, and that aerating and re-wetting the sediment amendments resulted in equal or greater removal of Hg from the water. The greatest removal of Hg was observed when more amendment was added to the sediment, however the greatest Hg uptake capacity (Hg captured per mass of material) was observed for the lowest doses of reactive media. The Hg uptake capacities ranged from 35-500 ng/g and were greatest for treatment of water with elevated concentrations of Hg. The Hg uptake capacities were a function of the Hg concentrations in the untreated water, and were generally lower relative to values reported in the literature. Column studies were used to simulate the flow of river water containing elevated concentrations of Hg through a reactive zone containing a charred hardwood material. The concentration of filtered Hg was < 120 ng/L for treated effluent from columns, resulting in > 98% removal of Hg from the water. Assuming that the majority of removal occurred within the initial 2-3 cm along the length of the column, the calculated uptake of Hg2+ ranged from 1.2-7.7 μg/g. The uptake capacity for charred hardwood material was much greater for the column experiments relative to the batch experiments, suggesting that the uptake capacity is limited by Hg loading. The chemical composition of the treated column effluent was similar to the South River water, and suggests the material did not add or remove significant constituents during the course of these experiments.