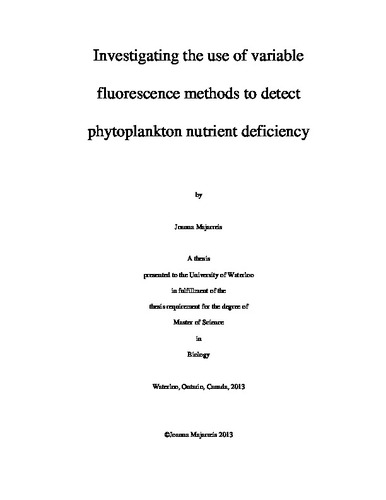 Variable fluorescence of chlorophyll a (Fv/Fm), measured by pulse amplitude modulated (PAM) fluorometers, is an attractive target for phytoplankton-related water quality management. Lowered Fv/Fm is believed to reflect the magnitude of nutrient sufficiency or deficiency in phytoplankton. This rapid and specific metric is relevant to Lake Erie, which often experiences problematic Cyanobacteria blooms. It is unknown whether PAMs reliably measure phytoplankton nutrient status or if different PAMs provide comparable results. Water samples collected from Lake Erie and two Lake Ontario sites in July and September 2011 were analysed using alkaline phosphatase assay (APA), P-debt, and N-debt to quantify phytoplankton nutrient status and with three different PAM models (PhytoPAM, WaterPAM and DivingPAM) to determine Fv/Fm. The Lake Ontario, Lake Erie East and Central Basin sites were all N- and P-deficient in July, but only the East and Central Basin and one Lake Ontario site were P-deficient in September. The West Basin sites were P-deficient in July and one West Basin site and a river site were N-deficient in September. Between-instrument Fv/Fm comparisons did not show the expected 1:1 relationship. Fv/Fm from the PhytoPAM and WaterPAM were well-correlated with each other but not with nutrient deficiency. DivingPAM Fv/Fm did not correlate with the other PAM models, but correlated with P-deficiency. Spectral PAM fluorometers (PhytoPAM) can potentially resolve Fv/Fm down to phytoplankton group by additionally measuring accessory pigment fluorescence. The nutrient-induced fluorescent transient (NIFT) is the observation that Fv/Fm drops immediately and recovers when the limiting nutrient is reintroduced to nutrient-starved phytoplankton. A controlled laboratory experiment was conducted on a 2x2 factorial mixture design of P-deficient and P-sufficient Asterionella formosa and Microcystis aeruginosa cultures. Patterns consistent with published reports of NIFT were observed for P-deficient M. aeruginosa in mixtures; the pattern for A. formosa was less clear. This thesis showed that Fv/Fm by itself was not a reliable metric of N or P deficiency and care must be taken when interpreting results obtained by different PAM fluorometers. NIFT analysis using spectral PAM fluorometers may be able to discriminate P-deficiency in M. aeruginosa, and possibly other Cyanobacteria, in mixed communities.