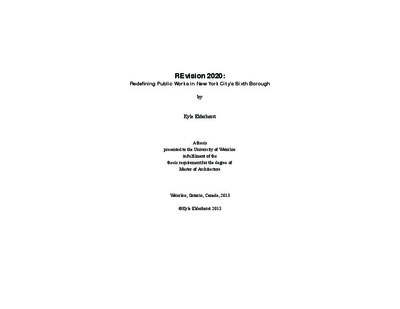 On March 14, 2011 the Bloomberg Administration unveiled New York City’s 10-year comprehensive waterfront plan entitled, “Vision 2020.” Though the document follows a long line of waterfront revitalization proposals, it offers an extraordinarily profound and historically unprecedented ambition to re-establish New York as one of the world’s premiere waterfront cities by transforming its post-industrial harbour into a “Sixth Borough” capable of sustaining expanded urban development, recreation, local ecologies, and water-based economies. Underlying this extensive redevelopment scheme is a massive environmental remediation initiative that aims to improve water quality throughout the region by upgrading the city’s crumbling, century-old sewer system to prevent it from spilling millions of gallons of untreated effluent into the New York Harbor every week. With no federal funding available for these costly upgrades, the city will depend on its taxpayers to finance the new borough’s extensive list of infrastructural needs. Convincing the public to support this initiative will however prove to be immensely difficult as most New Yorkers are unaware of the critical need for infrastructure at the waterfront and would rather see their taxes spent on parks, amenities, transportation, housing or the creation of jobs. Despite this, “Vision 2020” proposes the construction of standardized, single-service, shovel-ready, infrastructure that will be buried underground where it will make no visible social, aesthetic, or economic contribution to the transformation of public waterfront. For these reasons, REvision 2020 is proposed. Rather than subscribing to the 20th century understanding of infrastructure as a service-based utility, REvision 2020 examines the potential for the renovation New York City’s sewer system to catalyze a much larger and more visible public benefit in the Sixth Borough. In doing so, the document investigates the complex social, political, economic, and environmental challenges underlying the revitalization of the post-industrial waterfront and presents strategies for addressing these matters through a renegotiation of conventional infrastructural form. These strategies are then synthesized and applied to the design of a buoyant, high-performance sanitation system deployed in Brooklyn’s notoriously toxic Gowanus Canal to transform the derelict shipping channel into a public Wastewater-To-Resource Park that converts the region’s excess sewage into fresh water, nutrients, and energy which are reused to sustain recreational activities and new water-based economies. In addition to proposing a bottom-lined approach to the development of the Sixth Borough, REvision 2020 and the Gowanus W.T.R. Park champion the exploration of infrastructure not only as an engineering endeavor, but as a robust design opportunity.