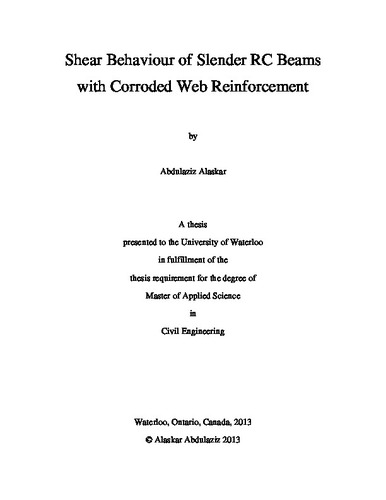 This research study examined the effect of corrosion of web reinforcement (stirrups) on the shear behaviour of slender reinforced concrete (RC) beams. The experimental program consisted of seventeen slender shear-critical RC beams: five uncorroded and twelve corroded beams. The test variables included: 1) corrosion level (0%, 7.5% and 15%); 2) type of stirrups (smooth and deformed); 3) stirrup diameter (D6, D12 and 10M); 4) stirrups spacing (100mm and 200mm); and 5) the presence of CFRP repair. The corroded beams had their stirrups subjected to corrosion using an accelerated corrosion technique and the mass loss in the stirrups was estimated based on Faraday’s law. All of the beams were monotonically tested to failure in three point bending. The corrosion cracks formed were parallel to the locations of stirrups as evidence of the corrosion damage in the corroded beams. The maximum decrease in the ultimate shear strength ranged from 11% to 14.4% for beams with high corrosion level of 15.6% mass loss. At a low corrosion level (4.39% mass loss), the shear strength of beams with smooth stirrups increased up to 35% due to the enhancement of shear friction at the concrete-corroded stirrups interface. The stiffness of the corroded beams was enhanced in comparison to the control beams. The ultimate deflection of the corroded beams was decreased up to 25% in comparison to the control beams. The CFRP repair increased the shear strength by 36% and improved the overall stiffness by 39% in comparison to the corroded unrepaired beams. All of the unrepaired beams failed in diagonal tension splitting, while the CFRP repaired corroded beams failed in diagonal tension splitting in addition to debonding of the FRP or concrete cover delamination. The actual corrosion mass loss results were in good correlation with Faraday’s law for the D12 and 10M stirrups. Poor correlation between actual and estimated mass loss was obtained for D6 smooth stirrups, possibly due to errors in the impressed corrosion. iv The analytical model used the modified compression field theory (MCFT) to predict the shear strength of uncorroded and corroded slender RC beams. In the corroded beams, two reduction factors were added to the MCFT model including the mass loss factor and the effective web width. Predictions based on the model revealed that the control beams gave a very good correlation with the ratio of experimental to predicted values that ranged from 0.94 to 1.02. On other hand, the ratio of experimental to predicted strength in the corroded beams ranged between1.06 to 1.4. The poor correlations were obtained for the beams with the D6 smooth stirrups. This study demonstrates that corrosion of web reinforcement can have a detrimental effect on the shear strength and ductility of slender shear-critical RC beams. The experimental results and analytical approach will be very useful for practicing engineers and researchers dealing with corrosion damage in slender RC members.