Developing a Probe for Real-Time Monitoring of Reagent Injections 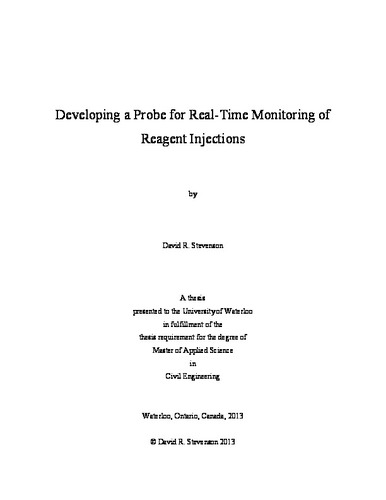 Reagent injections designed to provide in stiu mass destruction of soil and groundwater contaminants are commonly prone to failure due to inadequate distribution of the injected reagent. Reagent injections, in particular in situ chemical oxidation (ISCO) injections, require contact between the treatment reagent and targeted contaminant to allow for mass destruction in source zones and plumes. Subsurface heterogeneities that exist at all spatial scales prevent remediation specialists from accurate prediction of reagent distribution in the subsurface, even when significant site characterization and hydraulic testing has previously taken place. A prototype probe system was developed to provide real-time monitoring of the distribution of injected reagents. This thesis focused on laboratory testing of the system to verify that the design was capable of indicating the presence of an injected reagent in the field. Temperature and two-wire dipole resistance sensors were developed with low-cost materials to provide feedback on the electrical conductivity (EC) signatures produced by typical reagents mixed as salt solutions. Sensors were attached to sections of PVC conduit and wired to a data acquisition system to control measurements and store data. The temperature sensor was found to accurately respond to temperature changes in comparison to a commercial datalogger. Measured temperature differences between the constructed sensor and commercial datalogger were relatively constant, indicating that the constructed sensor could be calibrated to measurements from a commercial logger. Static cell experiments were conducted in beakers with varying concentration sodium chloride (NaCl), potassium permanganate (KMnO4) and sodium persulfate (Na2S2O8) solutions to determine dipole resistance sensor response to variations in EC. Different fixed resistors were wired with the dipole sensor circuit to determine the impact on sensor readings. Results indicated a nonlinear correlation between two-wire dipole resistance sensor response and increasing EC. Each constructed dipole sensor behaved uniquely. Raw sensor response was calibrated to EC by accounting for the influence of the fixed resistor. Data was fit to a second-order polynomial with form y = aEC2 + bEC + c, with r2 ranging from 0.92-1.00 for experiments with 4-6 measurement points. Calibrations were accurate within the range of EC for each static cell experiment; trends extrapolated beyond the measurement range were subject to significant error. The choice of fixed resistor did not appear to alter the accuracy of probe calibrations. Flow cell experiments were designed to analyze dipole resistance sensor response to continuous changes in EC. EC breakthrough curves (BTCs) were produced by injecting NaCl tracer solutions into the flow cell. Initial flow cell experiments conducted in an open water system showed agreement between dipole sensor measurement and handheld EC measurements on the rising limb of BTCs and divergence between the two datasets on the falling limb of BTCs. To resolve these issues, a more sophisticated tank with a porous medium was built and tested to compare sensor response from s prototype probe and a commercial EC datalogger. EC BTCs were measured under two scenarios: (1) conditions with deionized water (DI) circulating through the tank as the background solution, and (2) conditions with a simulated groundwater solution with elevated EC circulating through the tank as the background solution. BTCs produced agreement between EC recorded by the commercial logger and dipole resistance measurements for both the rising and falling limbs of BTCs. Results indicated the dipole resistance sensor was not capable of resolving fine changes in EC that occurred during breakthrough. A calibration of all in situ measurements from the experiments with porous medium confirmed the simulated groundwater experiments were subject to significantly less variability than the deionized water experiments. The calibration applied to the simulated groundwater measurements produced BTCs that matched very closely with those recorded by the commercial logger. Two field trials were also conducted during ISCO injections at contaminated sites where probes were installed in existing monitoring wells. The field trials did not successfully correlate dipole resistance sensor measurements with oxidant concentration. Observations from the second trial indicated the dipole sensor measurements correlated with EC of water samples. This work has provided a theoretical representation of two-wire dipole resistance sensor response to EC and has verified expected results through laboratory experiments. It has analyzed the influence of temperature and choice of fixed resistors on two-wire dipole resistance sensor readings, has extensively tested sensor response to EC during static cell and BTC experiments, and has displayed the prototype probe is capable of indicating the presence of injected reagents that have an EC signature. Further research avenues include pilot-scale testing in the field and developing a design for use with a direct-push rig.