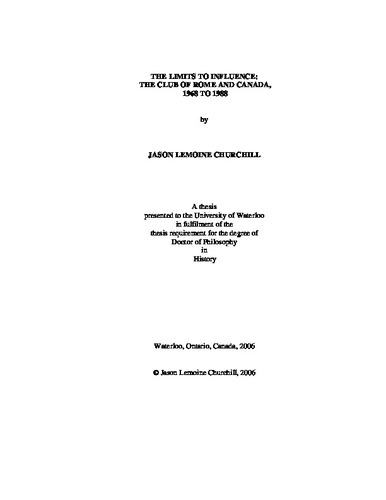 This dissertation is about influence which is defined as the ability to move ideas forward within, and in some cases across, organizations. More specifically it is about an extraordinary organization called the Club of Rome (COR), who became advocates of the idea of greater use of systems analysis in the development of policy. The systems approach to policy required rational, holistic and long-range thinking. It was an approach that attracted the attention of Canadian Prime Minister Pierre Trudeau. Commonality of interests and concerns united the disparate members of the COR and allowed that organization to develop an influential presence within Canada during Trudeau's time in office from 1968 to 1984. <br /><br /> The story of the COR in Canada is extended beyond the end of the Trudeau era to explain how the key elements that had allowed the organization and its Canadian Association (CACOR) to develop an influential presence quickly dissipated in the post-1984 era. The key reasons for decline were time and circumstance as the COR/CACOR membership aged, contacts were lost, and there was a political paradigm shift that was antithetical to COR/CACOR ideas. The broader circumstances that led to the rise and fall of the COR/CACOR's influential presence in Canada from 1968 to circa 1988 also provides a fascinating opportunity to assess political and intellectual tumult and change. <br /><br /> Specific organizations where the COR/CACOR's influential presence was felt included: the Ministry of State for Science and Technology, the International Development Research Centre, the Institute for Research on Public Policy, the Foundation for International Training, and the University of Guelph