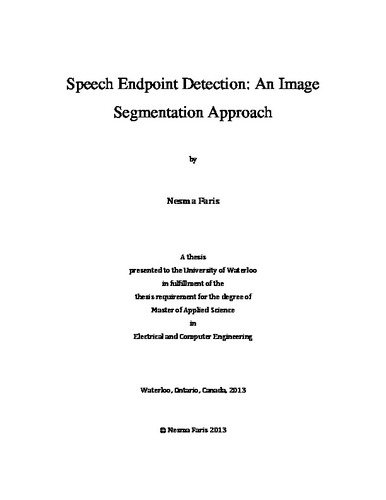 Speech Endpoint Detection, also known as Speech Segmentation, is an unsolved problem in speech processing that affects numerous applications including robust speech recognition. This task is not as trivial as it appears, and most of the existing algorithms degrade at low signal-to-noise ratios (SNRs). Most of the previous research approaches have focused on the development of robust algorithms with special attention being paid to the derivation and study of noise robust features and decision rules. This research tackles the endpoint detection problem in a different way, and proposes a novel speech endpoint detection algorithm which has been derived from Chan-Vese algorithm for image segmentation. The proposed algorithm has the ability to fuse multi features extracted from the speech signal to enhance the detection accuracy. The algorithm performance has been evaluated and compared to two widely used speech detection algorithms under various noise environments with SNR levels ranging from 0 dB to 30 dB. Furthermore, the proposed algorithm has also been applied to different types of American English phonemes. The experiments show that, even under conditions of severe noise contamination, the proposed algorithm is more efficient as compared to the reference algorithms.