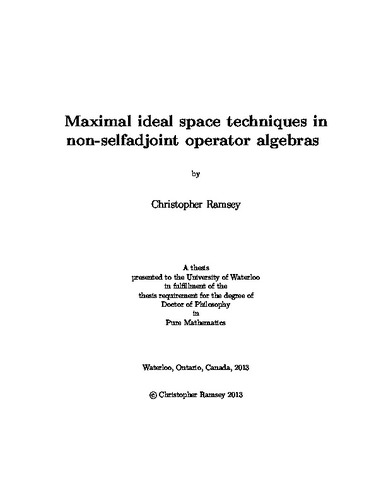 The following thesis is divided into two main parts. In the first part we study the problem of characterizing algebras of functions living on analytic varieties. Specifically, we consider the restrictions M_V of the multiplier algebra M of Drury-Arveson space to a holomorphic subvariety V of the unit ball as well as the algebras A_V of continuous multipliers under the same restriction. We find that M_V is completely isometrically isomorphic to cM_W if and only if W is the image of V under a biholomorphic automorphism of the ball. In this case, the isomorphism is unitarily implemented. Furthermore, when V and W are homogeneous varieties then A_V is isometrically isomorphic to A_W if and only if the defining polynomial relations are the same up to a change of variables. The problem of characterizing when two such algebras are (algebraically) isomorphic is also studied. In the continuous homogeneous case, two algebras are isomorphic if and only if they are similar. However, in the multiplier algebra case the problem is much harder and several examples will be given where no such characterization is possible. In the second part we study the triangular subalgebras of UHF algebras which provide new examples of algebras with the Dirichlet property and the Ando property. This in turn allows us to describe the semicrossed product by an isometric automorphism. We also study the isometric automorphism group of these algebras and prove that it decomposes into the semidirect product of an abelian group by a torsion free group. Various other structure results are proven as well.