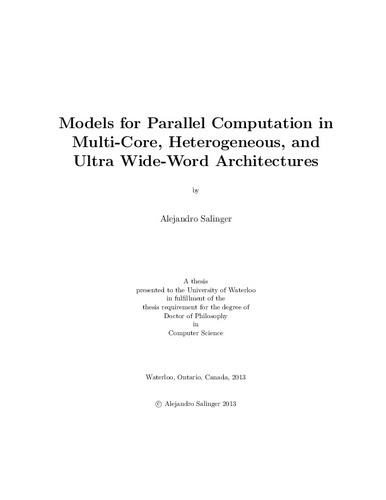 Multi-core processors have become the dominant processor architecture with 2, 4, and 8 cores on a chip being widely available and an increasing number of cores predicted for the future. In addition, the decreasing costs and increasing programmability of Graphic Processing Units (GPUs) have made these an accessible source of parallel processing power in general purpose computing. Among the many research challenges that this scenario has raised are the fundamental problems related to theoretical modeling of computation in these architectures. In this thesis we study several aspects of computation in modern parallel architectures, from modeling of computation in multi-cores and heterogeneous platforms, to multi-core cache management strategies, through the proposal of an architecture that exploits bit-parallelism on thousands of bits. Observing that in practice multi-cores have a small number of cores, we propose a model for low-degree parallelism for these architectures. We argue that assuming a small number of processors (logarithmic in a problem's input size) simplifies the design of parallel algorithms. We show that in this model a large class of divide-and-conquer and dynamic programming algorithms can be parallelized with simple modifications to sequential programs, while achieving optimal parallel speedups. We further explore low-degree-parallelism in computation, providing evidence of fundamental differences in practice and theory between systems with a sublinear and linear number of processors, and suggesting a sharp theoretical gap between the classes of problems that are efficiently parallelizable in each case. Efficient strategies to manage shared caches play a crucial role in multi-core performance. We propose a model for paging in multi-core shared caches, which extends classical paging to a setting in which several threads share the cache. We show that in this setting traditional cache management policies perform poorly, and that any effective strategy must partition the cache among threads, with a partition that adapts dynamically to the demands of each thread. Inspired by the shared cache setting, we introduce the minimum cache usage problem, an extension to classical sequential paging in which algorithms must account for the amount of cache they use. This cache-aware model seeks algorithms with good performance in terms of faults and the amount of cache used, and has applications in energy efficient caching and in shared cache scenarios. The wide availability of GPUs has added to the parallel power of multi-cores, however, most applications underutilize the available resources. We propose a model for hybrid computation in heterogeneous systems with multi-cores and GPU, and describe strategies for generic parallelization and efficient scheduling of a large class of divide-and-conquer algorithms. Lastly, we introduce the Ultra-Wide Word architecture and model, an extension of the word-RAM model, that allows for constant time operations on thousands of bits in parallel. We show that a large class of existing algorithms can be implemented in the Ultra-Wide Word model, achieving speedups comparable to those of multi-threaded computations, while avoiding the more difficult aspects of parallel programming.