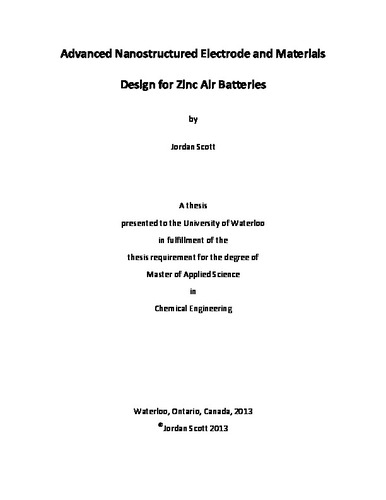 Zinc air batteries have great promise as a new age energy storage device due to their environmental benignity, high energy density in terms of both mass and volume, and low cost Zinc air batteries get their high energy density by using oxygen from the air as the active material. This means that all the mass and volume that are normally required for active material in a battery are replaced by a thin gas diffusion electrode which allows for oxygen from the air to diffuse into the cell. Although this seems ideal, there are many technical challenges associated with the cell being open to the atmosphere. Some of these issues include electrolyte and electrode drying out, poor reaction kinetics involving sluggish reaction, the need for bifunctional catalysts to charge and discharge, and durability of the gas diffusion electrode itself. The bifuntional catalysts used in these systems are often platinum or other precious metals since these are commonly known to have the highest performance, however the inherent cost of these materials limits the feasibility of zinc air systems. Thus, there is a need to limit or remove the necessity for platinum carbon catalysts. There are many types of non precious metal catalysts which can be used in place of platinum, however their performance is often not as high, and the durability of these catalysts is also weak. Similar limitations on feasibility are invoked by the poor durability of the gas diffusion electrodes. Carbon corrosion occurs at the harsh caustic conditions present at the gas diffusion electrodes, and this corrosion causes catalyst dissolution. Moreover, many issues with zinc electrode fabrication limit durability and usable anode surface area within these systems. There is a need for a stable, porous, high surface area anode with good structural integrity. These issues are addressed in this work by three studies which each focuses on solving some of the issues pertaining to a crucial component of zinc air batteries, those being the gas diffusion electrode, the zinc electrode, and the bifunctional catalyst necessary for oxygen reduction reactions (ORR) and oxygen evolution reactions (OER). The first study addresses the need for improvements to the zinc anode electrode. A new process is proposed for the production of porous zinc electrodes in which the porosity can be easily controlled. This process involves the mixing of atomized zinc powder with a filler compound such as ammonium chloride. The mixture is then pressed into a pellet and heat treated to a temperature which simultaneously sublimes/decomposes the filler compound, and anneals the zinc structure to improve structural integrity. The resultant porous anode showed significantly charge and discharge potentials over the solid plate anode, while allowing for increased control of porosity over other porous electrodes due to the ability to adjust pore size based on the filler compound particle size. The discharge potentials observed from these porous anodes were 20% greater than zinc plate anodes at 100mA, but up to 200% greater at elevated currents of 200mA. Similarly the charging potentials were 53.8% lower at 100mA, and 55.5% lower at 200mA., suggesting greatly improved performance by the porous anode. The second study addresses the need for more durable gas diffusion electrodes. In this study, the bifunctional catalyst was bound directly to a stainless steel current collector via polymer binding in an attempt to remove the possibility of carbon corrosion and catalyst dissolution. The new gas diffusion electrode was successful in eliminating carbon corrosion, wherein, the durability of cells which incorporate this type of electrode was significantly increased. The durability of cell was increased to a point where little to no degradation occurred over 1000 cycles of full cell testing, showing great promise for future use and commercial viability. The final study addresses the need for durable and high performance non precious metal catalysts. The effects of catalyst morphology were studied wherein various morphologies of spinel type cobalt oxide were synthesized and compared. Cobalt oxide nanosheets were successfully synthesized and compared to nanoparticles of comparable size. The cobalt oxide nanosheets showed better charge and discharge potentials as well as durability of the nanoparticles. Impedance analyses showed reduced charge transfer and cell component resistances associated with the nanosheet morphology. Cobalt oxide nanosheets were further compared against platinum carbon. Cobalt oxide nanosheets showed significantly better durability as well as lower charging potentials and higher discharge potentials over 75 cycles. After 75 cycles the platinum carbon had lost 55.7% of its discharge potential wherein cobalt oxide nanosheets lost none of its discharge potential. Three issues pertaining to three major cell components a zinc air were addressed with promising solutions proposed for each. This work provides a basis for advanced zinc electrode fabrication in which further improvements can be incorporated to address other issues pertaining to zinc electrode use. This work set up a basis for electrode design which focuses on non carbon supported catalysts, eliminating the issue of carbon corrosion and associated catalyst dissolution. Finally, the results from the morphology study elucidate the benefits of controlled morphology for bifunctional catalysts, showing how morphology can be adjusted to improve performance by improving cell and charge transfer resistances.