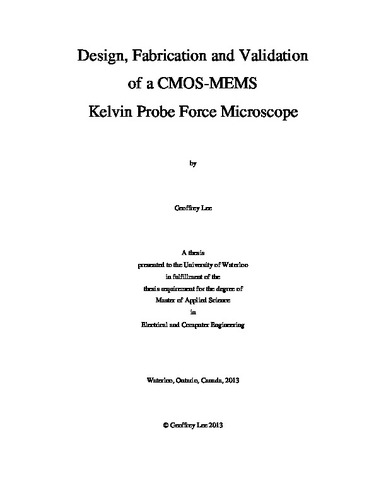 The Kelvin Probe Force Microscope is a type of scanning probe instrument that is used to discern the different work functions of a sample. A sharp probe at the end of a cantilever is lowered onto a substrate where electrostatic forces, caused by the difference in work function cause the cantilever to oscillate at the modulated frequency. Using this instrument, high resolution images can be obtained, mapping the surface electronic characteristics. However, developments of this instrument have generally been limited to obtaining higher resolution images as well as reducing noise in the output, limiting the widespread appeal of this expensive instrument. There exist many applications where extremely cheap, low footprint and easy-to-use Kelvin Probe Force Microscopes would be beneficial. In order to cheaply produce this microscope in batch, a post-processed CMOS-MEMS device is utilized. The polysilicon resistors act as a strain gauge such that a conventional optical system will not have to be employed. The ability to use integrated bimorph actuators on chip allow for movement of the cantilever without the employment of large piezoelectric stages with creep effects. Embedded electronics can be fabricated with the CMOS process alongside the MEMS device, allowing full integration of an on board amplifier and read out system. In general, a large table top system can be minimized onto the size of a <1 mm2 area, a microcontroller and a computer. In this work, a Kelvin Probe Force Microscope is designed, fabricated and validated. A MEMS device was designed following similar characteristics of a generic cantilever beam. The stiffness, length, resonant frequency, and other tip characteristics can be mimicked with careful design. The resultant designs were fabricated using a CMOS-MEMS process. In order to obtain a sharper tip with modified characteristics, various methods were employed; such as gallium-aluminum alloy tip formation as well as electroless plating onto the tip of the device. Finally, the resultant device is tested against a sample. It was seen that the MEMS device followed similar characteristics of the conventional microscope itself, validating the equations that define the method. Bimorph actuators were tested to show movement, allowing the integration of the cantilever with the XYZ-stage. Work function changes are observed while scanning different materials. It is shown throughout the course of this thesis, that a true Kelvin Probe Force Microscope can be designed, fabricated and validated using CMOS-MEMS technology.