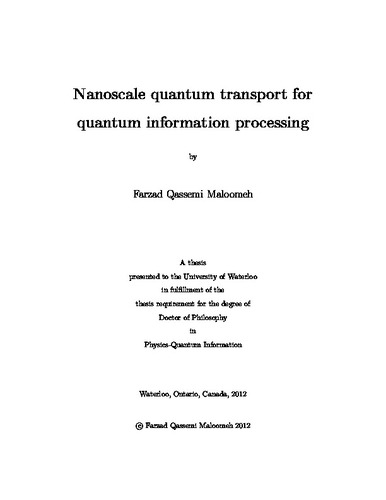 In this thesis, I study quantum transport of electron (e.g., current and noise) in quantum dots exploring microscopic processes responsible for spin-relaxation in double quantum dots in Pauli spin blockade regime. This is a regime where current is blocked due to the spin configuration of electrons in the dot. The Pauli spin blockade provides a means for preparation, manipulation and readout in spin qubits. Hence, understanding the underlying mechanism which lifts this blockade is extremely important. First, I have developed a theory of spin-flip cotunneling (higher order tunneling) processes in double quantum dots in the Pauli spin blockade regime. Utilizing this theory, I have calculated the full analytical dependence of the stationary current on applied magnetic fields, gate voltages, and an inter-dot tunnel coupling in Pauli spin blockade. This work is important for understanding the nature of leakage, especially in systems where other spin-flip mechanisms (due, e.g., hyperfine coupling to nuclear spins or spin-orbit coupling) are weak, including silicon and carbon nanotube or graphene quantum dots. This theory explains recent experiments on carbon nanotubes and silicon double quantum dot. In addition, I propose a new scheme based on the current noise to probe spin relaxation mechanisms in double quantum dot in the Pauli spin blockade regime, where spin-selection rule applies. As a result, I provide a simple closed-form expression which can be used to fit experimental data to extract multiple spin-relaxation rates, even at very low energy splitting. This method allows for the characterization of different aspects of decay process in these systems.