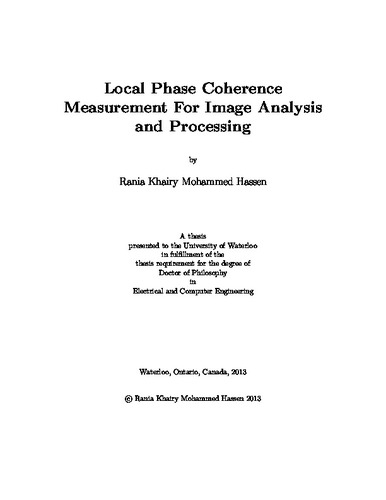 The ability of humans to perceive significant pattern and structure of an image is something which humans take for granted. We can recognize objects and patterns independent of changes in image contrast and illumination. In the past decades, it has been widely recognized in both biology and computer vision that phase contains critical information in characterizing the structures in images. Despite the importance of local phase information and its significant success in many computer vision and image processing applications, the coherence behavior of local phases at scale-space is not well understood. This thesis concentrates on developing an invariant image representation method based on local phase information. In particular, considerable effort is devoted to study the coherence relationship between local phases at different scales in the vicinity of image features and to develop robust methods to measure the strength of this relationship. A computational framework that computes local phase coherence (LPC) intensity with arbitrary selections in the number of coefficients, scales, as well as the scale ratios between them has been developed. Particularly, we formulate local phase prediction as an optimization problem, where the objective function computes the closeness between true local phase and the predicted phase by LPC. The proposed framework not only facilitates flexible and reliable computation of LPC, but also broadens the potentials of LPC in many applications. We demonstrate the potentials of LPC in a number of image processing applications. Firstly, we have developed a novel sharpness assessment algorithm, identified as LPC-Sharpness Index (LPC-SI), without referencing the original image. LPC-SI is tested using four subject-rated publicly-available image databases, which demonstrates competitive performance when compared with state-of-the-art algorithms. Secondly, a new fusion quality assessment algorithm has been developed to objectively assess the performance of existing fusion algorithms. Validations over our subject-rated multi-exposure multi-focus image database show good correlations between subjective ranking score and the proposed image fusion quality index. Thirdly, the invariant properties of LPC measure have been employed to solve image registration problem where inconsistency in intensity or contrast patterns are the major challenges. LPC map has been utilized to estimate image plane transformation by maximizing weighted mutual information objective function over a range of possible transformations. Finally, the disruption of phase coherence due to blurring process is employed in a multi-focus image fusion algorithm. The algorithm utilizes two activity measures, LPC as sharpness activity measure along with local energy as contrast activity measure. We show that combining these two activity measures result in notable performance improvement in achieving both maximal contrast and maximal sharpness simultaneously at each spatial location.