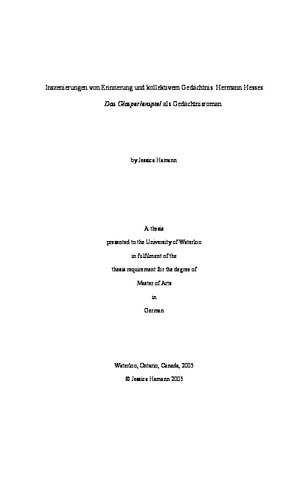 This thesis examins various representations of individual memories and collective memory in Hermann Hesse?s <em>Das Glasperlenspiel</em> (1946). The analysis of Hermann Hesse?s novel basically pursues three different objectives: First, the narrative construction of the protagonists individual memories and how these are related to his self-perception. The theoretical framework for this purpose includes on the one hand narratological categories and on the other hand approaches which combine narratology and representations of memory in literature as for example Basseler?s and Birke?s (2005) contribution ?Mimesis des Erinnerns. ? Their understanding of the mimesis of remembering implies the construction of memories on different narratological levels like the level of the narrator and the one of the characters. <br ><br /> The second goal of this thesis, the analysis of the Glass Bead Game as a metaphor, is inextricably intertwined with Josef Knecht?s individual development but also initiates problems of collective memory and how they can appear in the extra-literary reality. The institution of the Glass Bead Game embraces the essential problems the province of Castalia suffers from: the exclusion of history results in corporate stagnation. Aleida and Jan Assmann?s theory of cultural memory offers a view of the Glass Bead Game-metaphor that illustrates the consequences of a radical separation of cultural memory and communicative memory. Thereby the transmission of meaning is cut off and the contents of cultural memory lose their significance for individuals in a particular society. <br ><br /> Last but not least it is discussed why <em>Das Glasperlenspiel</em> can be considered to be a ?Gedächtnisroman? (memory novel) and which narratological procedures of representation constitute it as such. The category of ?Gedächtnisroman? derives from Astrid Erll?s enhancements of Jan Assmann?s theory of cultural memory and emphasizes the social function of memory-narratives. In <em>Das Glasperlenspiel</em> two rhetorical modes, the cultural and the reflective mode, can be identified as being dominant. That leads to the conclusion, that <em>Das Glasperlenspiel</em> on the one hand formulates a collective memory that exists outside of historical time and on the other hand places it in the context of a cultural tradition through functionalising a variety of ?cultural paradigms?. In the reflective mode, the novel allows an observation of the contemporary ?Erinnerungskulturen? (communities sharing collective memories) to the reader and creates a fictional model of collective memory that exemplifies its problematic dimensions. <br ><br /> The cultural studies approach of this thesis and especially the combination with theories of collective memory extends the investigation of memory as an inner-literal phenomenon and involves ?Erinnerungskulturen? as space of effect of literary texts. In this respect literature is no longer only a written medium but literary texts get subsumable as cultural forms of expression that make the development and change of ?Erinnerungskulturen? observable. In this spirit, literature is not restricted to being a medium of ?Erinnerungskultur?, but also takes part in the generation of memory.