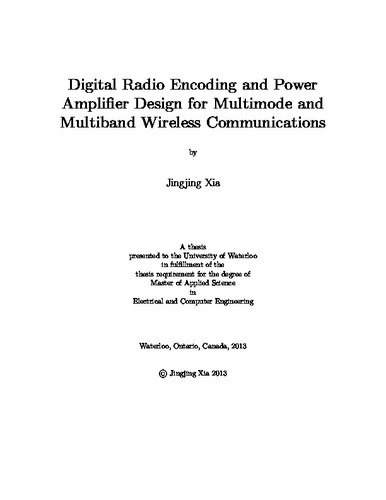 The evolution of wireless technology has necessitated the support of multiple communication standards by mobile devices. At present, multiple chipsets/radios operating at predefined sets of modulation schemes, frequency bands, bandwidths and output power levels are used to achieve this objective. This leads to higher component counts, increased cost and limits the capacity to cope with future communication standards. In order to tackle different wireless standards using a single chipset, digital circuits have been increasingly deployed in radios and demonstrated re-configurability in different modulation schemes (multimode) and frequency bands (multiband). Despite efforts and progress made in digitizing the entire radio, the power amplifier (PA) is still designed using an conventional approach and has become the bottleneck in digital transmitters, in terms of low average power efficiency, poor compatibility with modern CMOS technology and limited re-configurability. This research addresses these issues from two aspects. The first half of the thesis investigates signal encoding issues between the modulator and PA. We propose, analyze and evaluate a new hybrid amplitude/time signal encoding scheme that significantly improves the coding efficiency and dynamic range of a digitally modulated power amplifier (DMPA) without significantly increasing design complexity. The proposed hybrid amplitude/time encoding scheme combines both the amplitude domain and the time domain to optimally encode information. Experimental results show that hybrid amplitude/time encoding results in a 35% increase in the average coding efficiency with respect to conventional time encoding, and is only 6.7% lower than peak efficiency when applied to a Wireless Local Area Network (WLAN) signal with a peak to average power ratio equal to 9.9 dB. A new DMPA architecture, based on the proposed hybrid encoding, is also proposed. The second half of this thesis presents the design, analysis and implementation of a CMOS PA that is amenable to the proposed hybrid encoding scheme. A multi-way current mode class-D PA architecture has been proposed and realized in 130 nm CMOS technology. The designed PA has satisfied the objectives of wide bandwidth (1.5 GHz - 2.7 GHz at 1 dB output power), and high efficiency (PAE 63%) in addition to demonstrating linear responses using the proposed digital encoding. A complete digital transmitter combining the encoder and the multi-way PA was also investigated. The overall efficiency is 27% modulating 7.3 dB peak to average power ratio QAM signals.