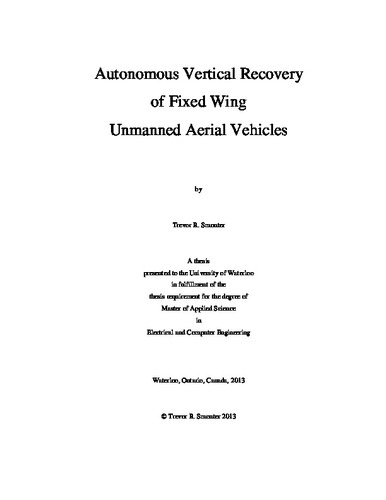 As unmanned aerial vehicles (UAVs) prevail in commercial and first responder applications, the need for safer and more consistent recovery methods is growing. Standard aircraft landing manoeuvres are only possible with a suitable runway which is often unavailable outside of military applications. Alternative recovery approaches can be either contained within the aircraft, ie. parachute or be setup on the ground ie. net landing. By integrating the recovery system into the vehicle, the flight preparation can be streamlined due to the fact that setting up recovering devices is no longer required. The goal of this thesis is to investigate the application of an autonomous vertical landing capability for fixed wing UAVs using articulated motors to enter vertical flight. Using an experimental UAV design, the dynamics of the problem were investigated using recorded flight data. Implementing a decoupled control approach, the aircraft was stabilized to maintain a horizontal hover. Through the characterized plant model that defines the vertical descent behaviour, a control topology was developed and tested in simulation using an optimal control approach. The developed controller was tested on the experimental UAV to verify the vertical landing performance. It was determined that this approach was well suited to autonomous vertical recovery of a fixed wing UAV. In employing this approach to UAV recovery, operators can easily operate in theatres where space for conventional landing does not exist.