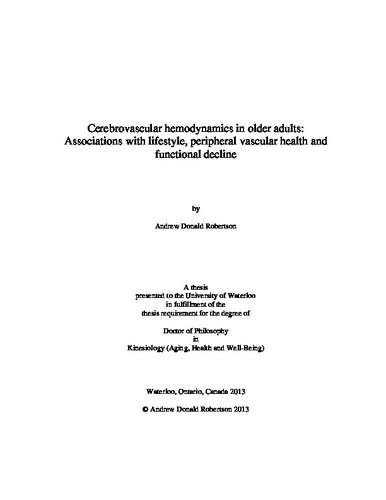 In today’s aging population, cerebrovascular health plays a pivotal role in maintaining independence. The identification of early markers of change might help to plan more appropriate preventative and/or therapeutic measures. Recent focus has been placed on the relationship between peripheral vascular characteristics and cerebral hemodynamics. Given the compliant nature of the cerebral circulation, examination of passive properties, including critical closing pressure (CrCP) and resistance area product (RAP), might provide sensitive information about early functional changes. The purpose of this thesis was to provide a comprehensive view of peripheral vascular and cerebrovascular regulation in community-living older adults. In doing so, the thesis covered a spectrum, ranging from an examination of lifestyle factors, including habitual physical activity and sleep quality, to the impact of cerebrovascular health on functional status, characterized by gait speed. Key findings included the observation that while participants showed the ability to regulate cerebral blood flow (CBF) appropriately in most circumstances, the underlying mechanisms used to achieve this regulation was dependent on baseline vascular tone. During sit-to-stand transitions, individuals with lower baseline resistance relied primarily on fluctuations in RAP, which have been suggested to more closely reflect myogenic pathways. In contrast, individuals with elevated resistance had lower baseline CBF and relied relatively more on fluctuations in CrCP during the dynamic transition. The greater reliance on CrCP might indicate that these individuals were required to tap further into reserve pools to avoid hypoperfusion during the transition. Notably, those who exhibited a smaller dynamic RAP response during the posture change also had slower gait speed and higher occurrence of falls over the past year. These results provide evidence that passive cerebrovascular dynamics are sensitive markers linking peripheral and cerebrovascular properties with functional consequences for brain health in the elderly.