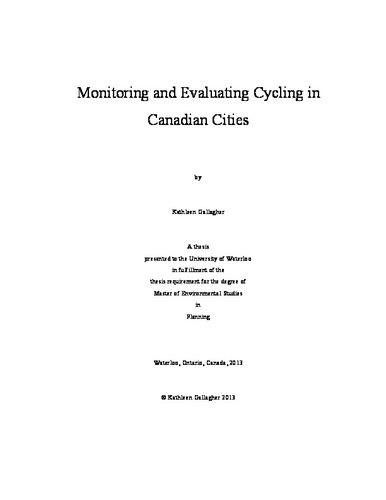 Many cities in North America have stated goals in their Official Plans, Transportation Plans, and other municipal documents related to cycling. A common objective is to increase the number and proportion of cyclists for either utilitarian or both utilitarian and recreational trips. To determine whether they are progressing towards achieving their goals, it is necessary that cities periodically and accurately monitor and measure their levels of cycling. This thesis aims to assess the different methods used for monitoring cycling in Canadian cities, as well as individual cities’ overall monitoring programs. The advantages and disadvantages of different methodologies and technologies are discussed, and best practices are provided. Four case study cities: Vancouver, Halifax, Calgary and Toronto are assessed according to a list of best practices developed by Hudson et al. (2010). Themes and patterns emerge and the cities are compared and contrasted. A summary of Canadian cities’ efforts is presented and the cities are ranked in the following order: #1 Vancouver; #2 Toronto; #3 Calgary; and #4 Halifax. In addition, the results of two surveys from the Greater Toronto and Hamilton Area are compared at the census tract (CT) level to assess their reliability. The Bicycling Share of Work Trips (BSWT) from the Transportation Tomorrow Survey (TTS) and Statistics Canada’s Canadian Census (the Census) is examined to identify whether research from different sources is producing the same results. Geographic Information Systems are used to examine and compare the spatial patterns of the survey results and descriptive statistics are used to quantify the differences. It was found that the surveys are producing significantly different results and that there appears to be little spatial pattern in the difference between them. This research allows Canadian cities and other interested parties to learn about the various methods for monitoring cycling, to see which methods are being used in Canadian cities, to decide which methods are best for their specific needs, and to more comprehensively understand the BSWT from the Census and the TTS.