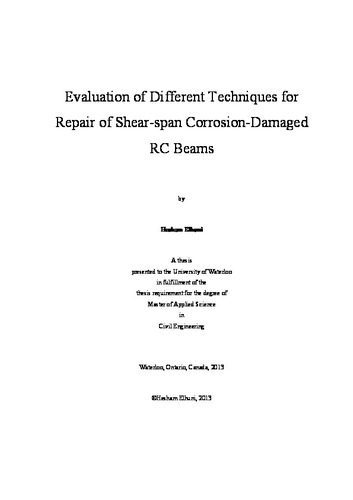 Deterioration of reinforced concrete structures due to reinforcement corrosion is a serious problem that faces concrete infrastructure worldwide. Effect of the rebar corrosion in the shear span on the structural behaviour is not fully addressed in the published literature. This study examined the effects of corrosion of the longitudinal reinforcement in the shear span on the structural behaviour of RC beams and the effectiveness of three rehabilitation schemes on the structural performance of such beams. The experimental program consisted of testing fifteen medium-scale reinforced concrete beams (150mm wide x 350mm deep x 2400mm long) under static load. Test variables included: span to depth ratio, the degree of corrosion and the anchorage end condition and repair schemes. Two span to depth (a/d) ratios were considered: a/d=3.4 with one-point loading and a/d=2.4 with two-point loading. Two anchorage end-conditions were used: bonded or un-bonded reinforcement in the an-chorage zone. Four degrees of corrosion were chosen to simulate minor (2.5% to 5% mass loss), medium (7.5% mass loss), and severe (15% mass loss) degrees of corrosion. Corrosion was induced in the longitudinal reinforcement in the shear-span using accelerated corrosion techniques based on Faradays’ law. Three different repair scenarios were applied. The first scenario included removing the deteriorated concrete, cleaning the corroded steel and patching with a new self-compacting concrete. The second scenario included U-wrapping the beams cross-section using Glass fiber reinforced cement-based composite (GFRCM), and Carbon fiber reinforced cement-based composite (CFRCM) without removing the deteriorated concrete. The third scenario included patch repair and confinement by wrapping with GFRCM or CFRCM. Following corrosion and repair, all specimens were loaded statically to failure. Test results showed no major effect of shear-span corrosion on the flexural behaviour for the beams with end anchorage whereas a noticeable effect on the flexural behaviour was observed for beams with no end anchorage regions. The corrosion degree and the shear span to depth ratio affected the mode of failure for the specimens with no end anchorages. The type of repair significantly affected the overall behaviour of the corroded specimens. An analytical model was proposed and used to predict the load-deflection response of the tested specimens. The program calculated the mid-span deflection for a given load as an integration of the deflection of a series of elements, with the deflection being based on the elongation of the steel reinforcement in each element. A modified bond stress-slip model was incorporated into the calculations to account for the change in bond strength caused by the corrosion and/or confinement that are provided by repairs. The predicted results were in reasonable agreement with the experimental results.