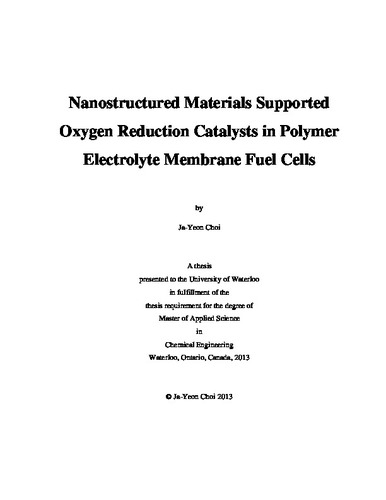 Polymer electrolyte membrane (PEM) fuel cells have been viewed as promising power source candidates for transport, stationary, and portable applications due to their high efficiency and low emissions. The platinum is the most commonly used catalyst material for the oxygen reduction reaction (ORR) at the cathode of PEM fuel cells; however, the limited abundance and high cost of platinum hinder the large-scale commercialization of fuel cells. To overcome this limitation, it is necessary to enhance the catalyst utilization in order to improve the catalytic activity while decreasing or eliminating the use of platinum. The material on which the catalyst is supported is important for the high dispersion and narrow distribution of Pt nanoparticles as well as other non-precious metal active sites, and these characteristics are closely related to electrocatalytic activity of the catalysts. The support materials can influence the catalytic activity by interplaying with catalytic metals, and the durability of the catalyst is also greatly dependent on its support. A variety of support materials like carbons, oxides, carbides, and nitrides have been employed as supports materials for fuel cell catalysts, and much effort has been devoted to the synthesis of the novel carbon supports with large surface area and/or pore volume, including nanostructured carbons such as carbon nanotubes (CNTs), carbon nanofibers, and mesoporous carbon. These novel nanostructured carbon materials have achieved promising performance in terms of catalytic activity and durability. However, there is still enormous demand and potential for the catalysts to improve. In the first study, non-precious metal catalysts (NPMC) for the oxygen reduction reaction were synthesized by deposition of Fe/Co-Nx composite onto nanoporous carbon black with ethylenediamine (EDA) as nitrogen precursor. Two different nanoporous carbon supports, Ketjen Black EC300J (KJ300) and EC600JD (KJ600), were used as catalyst support for the non-precious catalysts. The results obtained from the optimized FeCo/EDA-carbon catalyst, using KJ600 as the support, showed improved onset, half-wave potentials and superior selectivity than that of the KJ300. Similarly, the catalyst showed good performance in the hydrogen-oxygen PEM fuel cell. At a cell voltage of 0.6 V the fuel cell managed to produce 0.37 A/cm2 with a maximum power density of 0.44 W/cm2. Fuel cell life test at a constant voltage of 0.40 V demonstrated promising stability up to 100 h. The X-ray photoelectron spectroscopy study indicated that pyridinic type nitrogen of the non-precious metal catalysts is critical for ORR catalytic activity and selectivity. These results suggest higher pore volume and surface area of carbon support could lead to higher nitrogen content providing more active sites for ORR and this type of catalyst has great potential used as a non-precious PEM fuel cell catalyst. In the second study, we report the development of a novel NPMC in acid electrolyte using pyrimidine-2,4,5,6-tetramine sulfuric acid hydrate (PTAm) as a nitrogen precursor and graphene nanosheets as catalyst supports. Graphene, consisting of a two-dimensional (2D) monolayer of graphitic carbon atoms, has been viewed as a promising candidate for the fuel cell catalyst support, due to its many intriguing properties such as high aspect ratios, large surface areas, rich electronic states, good electron transport, thermal/chemical stability and good mechanical properties. We investigate the effect of different pyrolysis temperatures on the catalysts’ ORR activity along with detailed surface analysis to provide insight regarding the nature of the ORR active surface moieties. This novel NPMC demonstrates promising electrocatalyst activity and durability superior to that of commercial catalyst for the ORR, rendering graphene nanosheets as a suitable replacement to traditional nanostructured carbon support materials. In the final study, we have developed Pt catalyst by combining the precious metal with nitrogen-doped activated graphene (N-AG) as the support. A transmission electron microscopy (TEM) image of the catalyst shows uniform size and distribution of platinum nanoparticles on a graphene layer. This novel catalyst demonstrates superior electrocatalyst activity and durability over Pt/XC72 catalyst for ORR under the studied conditions, rendering graphene as an ideal replacement to traditional nanostructured carbon support materials. In summary, several catalyst samples were made using novel nanostructured support materials to improve the ORR performance. Several recommendations for future work were suggested in the last section of this work to further apply the knowledge and understanding of nanostructured support materials to design a highly active, durable, and low-cost NPMCs and platinum catalysts.