Moving Against the Grid: The Pursuit of Public Life during Apartheid, South Africa 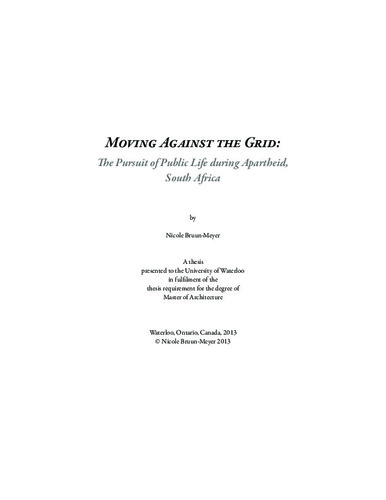 The reality of cities is that, no matter how designed, controlled, or planned they are, people will do as they like. They will find ways to live and move through them that suit their purposes, even if this means going against a ‘designed’ system. In the case of South Africa during apartheid, this movement was obstructed by institutionalised segregation and State oppression. Apartheid, which means ‘apart’ and ‘hood’ in Afrikaans, was an attempt to inscribe a power structure into the spatial framework of a territory, based on notions of capitalism, race, and hygiene. As a mechanism of social control, it relied heavily on concepts of space and power to achieve the white ideal of racial segregation. Although the spaces of apartheid may be seen as fixed and concrete, internal contradictions contested their authority. While apartheid legislated, controlled, and monitored the movement of all South Africans, the actions of many of its citizens created counter mechanisms which diminished its effect. Despite the official days of apartheid now being over, the question remains: how do people create and maintain public life in the face of an administrative system of control? The spaces created by the everyday actions of those living under apartheid - the stories, music, dance, and protests that were part of the country’s culture of subversion and resistance - were, for years, the site of public life in South Africa.