Surface Geometry and the Haptic Rendering of Rigid Point Contacts 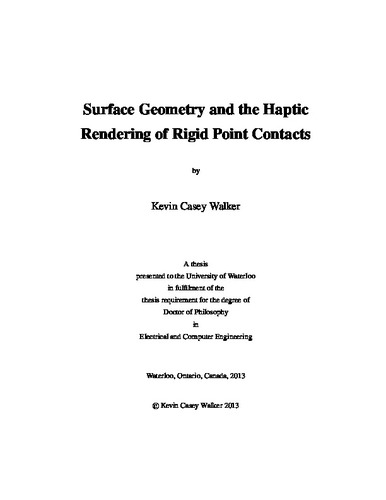 This thesis examines the haptic rendering of rigid point contacts in virtual simulations. The haptic renderers generate force feedback so that the operator can interact with the virtual scenes in a realistic way. They must be able to recreate the physical phenomena experienced in the real world without displaying any haptic artifacts. The existing renderers are decomposed into a projection function and a regulation scheme. It is shown that the pop-through artifact, whereby the virtual tool instantaneously jumps between two distant surface points, is caused whenever the operator encounters a singularity within the renderer's projection function. This was well known for the minimum distance based renderers, but it is shown here that such singularities arise with the constraint based renderers as well. A new projection function is designed to minimize the existence of singularities within the model. When paired with an appropriate regulation scheme, this forms the proposed mapping renderer. The new projection is calculated by mapping the model onto a canonical shape where the haptic problem is trivial, e.g. a circle in the case of a 2D model of genus zero, which avoids pop-through on smooth models. The haptic problem is then recast as a virtual constraint problem, where the traditional regulation schemes, designed originally for planar surfaces, are shown to introduce a velocity dependent error on curved surfaces that can distort the model's rendering and to couple the regulation towards and dynamics along the constraint. Set stabilization control, based on feedback linearizing the haptic device with respect to a virtual output consisting of coordinates transversal and tangential to the model surface, is proposed as an alternative. It is shown to be able to decouple the system into transversal and tangential subsystems that can then be made asymptotically stable and assigned arbitrary dynamics, respectively.