Democratic Equality and Responsibility: the Opportunity Costs of Primary Goods 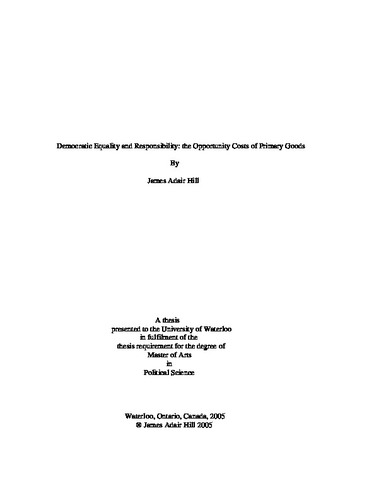 This thesis first critically analyzes John Rawls?s second principle of justice as a democratic conception of equality and the challenge posed to that conception by Ronald Dworkin?s 'Equality of Resources. ' Democratic equality is defended over luck egalitarianism as an articulation of liberal egalitarianism. However, where Rawls deems social primary goods to be unconditionally regulated by institutions, Rawls is largely silent about the fair assignment of costs and burdens that correspond to the fair provision of opportunities and primary goods. Dworkin?s notion of 'opportunity costs' is argued to improve on the role of responsibility in democratic egalitarianism by making clear that the provision of primary goods creates costs and burdens within a system of social cooperation. The second section illustrates this argument by considering claims to self-government by Canadian Aboriginals. By formulating a distributive criterion that treats Aboriginal self-government as a primary good, I show that claims of culture and identity can be resolved responsibly within the framework of distributive justice.