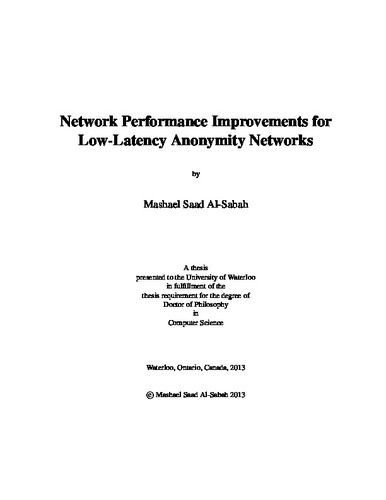 While advances to the Internet have enabled users to easily interact and exchange information online, they have also created several opportunities for adversaries to prey on users’ private information. Whether the motivation for data collection is commercial, where service providers sell data for marketers, or political, where a government censors, blocks and tracks its people, or even personal, for cyberstalking purposes, there is no doubt that the consequences of personal information leaks can be severe. Low-latency anonymity networks have thus emerged as a solution to allow people to surf the Internet without the fear of revealing their identities or locations. In order to provide anonymity to users, anonymity networks route users’ traffic through several intermediate relays, which causes unavoidable extra delays. However, although these networks have been originally designed to support interactive applications, due to a variety of design weaknesses, these networks offer anonymity at the expense of further intolerable performance costs, which disincentivize users from adopting these systems. In this thesis, we seek to improve the network performance of low-latency anonymity networks while maintaining the anonymity guarantees they provide to users today. As an experimentation platform, we use Tor, the most widely used privacy-preserving network that empowers people with low-latency anonymous online access. Since its introduction in 2003, Tor has successfully evolved to support hundreds of thousands of users using thousands of volunteer-operated routers run all around the world. Incidents of sudden increases in Tor’s usage, coinciding with global political events, confirm the importance of the Tor network for Internet users today. We identify four key contributors to the performance problems in low-latency anonymity networks, exemplified by Tor, that significantly impact the experience of low-latency application users. We first consider the lack of resources problem due to the resource-constrained routers, and propose multipath routing and traffic splitting to increase throughput and improve load balancing. Second, we explore the poor quality of service problem, which is exacerbated by the existence of bandwidth-consuming greedy applications in the network. We propose online traffic classification as a means of enabling quality of service for every traffic class. Next, we investigate the poor transport design problem and propose a new transport layer design for anonymous communication networks which addresses the drawbacks of previous proposals. Finally, we address the problem of the lack of congestion control by proposing an ATM-style credit-based hop-by-hop flow control algorithm which caps the queue sizes and allows all relays to react to congestion in the network. Our experimental results confirm the significant performance benefits that can be obtained using our privacy-preserving approaches.