Preparation of Thermoplastic Vulcanizates from Devulcanized Rubber and Polypropylene 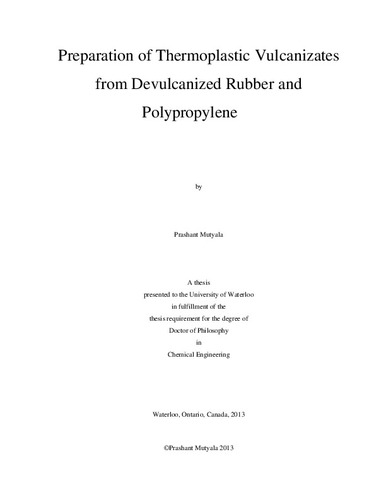 One of the current problems faced by mankind is the problem of safe disposal of waste rubber. Statistics show that the number of waste tires is continuously increasing at a very rapid rate. Since rubber materials do not decompose easily (due to their crosslinked structure), they end up being a serious ‘environmental problem’. An intuitive solution to prevent the accumulation of the scrap tires is to continuously reuse them. A new patented reclamation method was discovered in our laboratory, which makes use of a twin screw extruder (TSE) in order to produce reclaimed rubber (referred as devulcanized rubber (DR) from here on) of very high quality. Also, this method has proven to be more economical than other commercial reclaiming methods. Products made solely from a reclaimed material face challenges from those made by virgin materials because of relatively poor properties. However, the striking advantage of using reclaimed rubbers is the cost reduction. Hence, it is important to work on establishing methods by which these reclaimed rubbers could be efficiently used and incorporated into present day products. The deterioration of properties could be minimized by blending them with varying amounts of other materials. A possibility in this direction is manufacturing of thermoplastic vulcanizates (TPVs) using reclaimed rubber and general purpose thermoplastics. In accordance with this idea, the focus of this research is to prepare DR and polypropylene (PP) based TPVs. DR is unique as the rubber itself consists of two phases- one phase consisting of uncrosslinked (including devulcanized rubber molecules), and the other phase consisting of crosslinked (un-devulcanized) rubber. These un-devulcanized crumbs act as stress concentrators because they do not break-up easily, and lead to poor physical properties. Hence, this project tries to find out ways to increase the interfacial adhesion between the rubber and PP by using reactive and non-reactive techniques. Preliminary experiments were carried out in a batch mixer to compare DR and rubber crumb (CR). DR based TPVs showed better properties than CR based TPVs, however, the properties were not useful for commercial applications. Sulphur based dynamic vulcanization was studied in a batch mixer and found to be not effective in improving the properties of DR based blends. On the other hand, DCP/ sulphur based curing system was found to show significant improvement in properties. Therefore, DCP/sulphur based curing package was studied in detail on the blends consisting of DR and PP. The optimum ratio of DCP/sulphur was found to vary depending on the ratio of DR/PP. A hypothesis regarding the mechanism of DCP/sulphur curing has been proposed, which seem to correlate well with the experimental results observed. Additionally, it was determined that DR prepared from tire rubber (DRT) performed better than DR prepared from waste EPDM (DRE) for the curing system used. Accordingly, experiments on a TSE were carried out using DRT and a combination of compatibilizing resins and curatives. This combination showed a drastic improvement in blends properties and once again the optimum ratio of compatibilizing resins seemed to depend on the ratio of DRT/PP. As a result of the work, successful strategies based on reactive compatibilization techniques were developed in order to prepare useful TPVs having up to 70% DR. A series of compatibilization techniques has been evaluated using design of experiments and various characterization techniques such as mechanical tests, scanning electron microscopy, thermal analysis and crosslink density measurements. This led to the development of a formulation, which could improve the blend properties significantly. A tensile strength of around 10 MPa and an elongation-at-break of 150-180 % could be achieved for devulcanized rubber (70%) based TPVs, which has broadened the scope for its commercial applications. In addition to that, the process was established on a TSE that has enabled a continuous and steady production of these TPVs with reasonable throughputs.