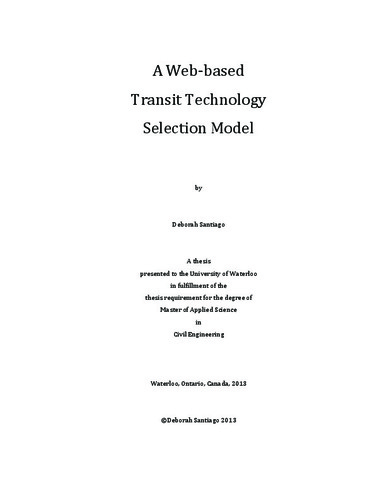 There are many cities in North America planning to upgrade or implement public transportation infrastructure with the goals of increasing transit ridership and promoting transit-oriented development. The most commonly considered transit systems in mid-sized cities are bus rapid transit (BRT) and light rail transit (LRT). Planners and engineers in these cities often debate on which of these modes offer the more appropriate technology to meet the cities’ transit requirements. From a transportation engineering perspective, the goal of technology selection should be to choose the mode that has the best set of attributes – investment cost, operating cost, environmental and land use impacts – for the city and / or region. This thesis presents the development of an easy-to-use and accessible model (available via website) that assists in the technology selection process, considering investment costs, operating costs and environmental impacts. The objectives of this model include: finding annual costs for the transit modes being evaluated, finding the most appropriate transit mode for a specific scenario, finding the demand at which both transit modes have the same annual costs, testing the sensitivity that outputs have to inputs, finding annual emissions produced for both modes, and showing results that are visual and easy to understand. The model developed in this thesis is applicable mainly in mid-sized cities, which are interested in implementing new, or to improve existing transit systems into, rapid transit systems, like LRT and BRT, but the methods could be easily extended to apply it to other technologies as well. The model was applied to four cases to determine which mode would be more appropriate in these scenarios. The cases that will be studied include: Region of Waterloo in Ontario; Victoria, British Columbia; Cleveland, Ohio; and Mexico City. The results of the analysis made to these four case studies showed how the model can be used in the technology selection process. For these cases it was found that, for the Region of Waterloo and Victoria, LRT would be the less expensive mode in an annual basis, while, for Cleveland and Mexico City, BRT would be the less expensive mode. The break-even point analysis concluded with three main outcomes: for the Region of Waterloo this point would be 1200 passengers/hour and for Victoria it would be 1500 passengers/hour, which is less than the projected ridership for both cases; and for the other two cases (Cleveland and Mexico City) this point was not found for the stated scenario. The findings in the emissions module were the following: for the Region of Waterloo and Victoria: LRT would be the cleaner mode for all emissions; and for Cleveland: LRT would be the cleaner mode when considering NOx, but BRT would be the cleaner mode for SO2 and CO2. Future research can be conducted in adding more technologies into the comparison made in the model making the model functional for smaller and/or larger cities. Further investigation can also be applied in the emissions module creating a larger database to make this module capable of obtaining results in a global scale.