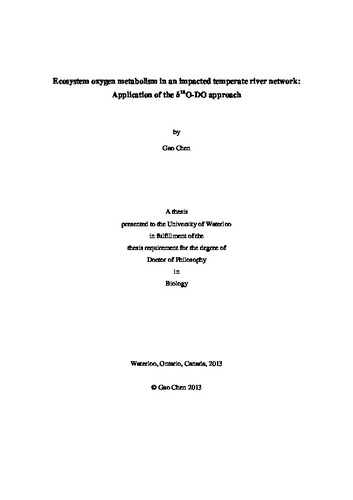 Ecosystem metabolism is an important indicator of aquatic ecosystem function. This thesis concerns ecosystem metabolism as recorded by daily variation in dissolved oxygen (DO) and δ18O-DO in an impacted temperate river network, the Grand River, Ontario, Canada, and specifically addresses the effects of stream size and human disturbance including agriculture, deforestation, and wastewater treatment plants (WWTPs). A suite of 14 sites in the Grand River network was selected with stream sizes varying from 2nd to 7th order. A transient model of river ecosystem oxygen metabolism, ROM-TM, was developed in order to calculate river ecosystem metabolic rates and reaeration rates from field observation of changes in DO and δ18O-DO. ROM-TM is an inverse modeling approach programmed using MATLAB. Key parameters describing the main metabolic processes, gas exchange, and isotopic fractionation, such as maximum photosynthetic rate (Pm), photosynthetic efficiency (a), respiration rate at 20℃ (R20), gas exchange coefficient (k), respiration isotopic fractionation factor (aR), and photorespiration coefficient (βR), can be obtained by matching of model predictions with field data. Besides being capable of teasing apart metabolic processes and gas exchange to provide daily average estimates of metabolic parameters at the ecosystem level, ROM-TM can be used to address issues related to light including light saturation phenomena at the ecosystem level, the effect of cloud cover on metabolic balance and photorespiration. Primary production responses to light along a longitudinal gradient in the Grand River network were described by means of P-I curves. Both light-limited and light-saturated conditions were observed. Production parameters Pm and Ik in the Grand River network exhibited an increase with stream order, while a was independent of stream size. However, a did vary among and within sites. Higher light availability in small and middle-sized streams without riparian trees was associated with high Pm, Ik and Ec, but low a. Ecosystem-level Pm in both small periphyton-dominated streams and large macrophyte-dominated rivers in the Grand River basin were generally less than community-level Pm values from the literature. However, two Grand River sites had comparable Pm to literature-derived Pm due to the prolific growth of macrophytes supported by high nutrient effluents from upstream WWTPs. Ecosystem-level a in my study streams were also less than those at the community level, indicating there was a declining trend of this parameter with scale, from individual, community to ecosystem. Derived parameters (e.g., Ik, Ec, and saturation point) increased from the individual level to the community level, and then to the ecosystem level. From May to early October, metabolic rates in the Grand River network (gross primary production, GPP = 0.4 to 20 and ecosystem respiration, ER = 2 to 33 g O2 m-2 day-1) were within the broad range of metabolic rates occurring in the temperate region, regardless of stream size. The Grand River network is a net heterotrophic system. The total GPP and ER for whole basin was 3.3e+08 and 4.2e+08 g O2 day-1, respectively. Reach geomorphology controls the spatial patterns of stream metabolism in the Grand River network, although the spatial patterns may be modified by effects of human disturbance on riparian vegetation, nutrients and other factors. Stream order and channel width, as measures of stream size, are good predictors of metabolic rates and ratios of GPP: ER from small streams to the central Grand River. Ecosystem metabolic rates and ratios generally increase with stream size, but with site-specific variation. The Grand River network is experiencing effects of human disturbance, mostly downstream of the urban areas and least in small streams with remaining riparian forest. The small and middle-sized streams (2nd to 4th order) without riparian trees in agriculture regions in the Grand River basin did not exhibit significantly different GPP and ER than their counterparts with riparian trees. The stimulative effect of increased light availability due to open canopy on GPP in non-shaded streams may be offset by shading from stream banks and riparian grasses, and unstable sediments resulting from agricultural activities. Large river sites impacted by WWTPs had significantly increased metabolic rates, both GPP and ER, compared to two upstream sites impacted by agriculture only. This result suggests that urban areas cause impacts on the Grand River that are superimposed on the impacts of agriculture. Three aspects of metabolism of the Grand River differ from the general pattern for the temperate regions: (1) a increase trend of GPP: ER ratios with stream size from 2nd to 7th order; (2) overall, human activities in the Grand River watershed have stronger positive effects on the GPP than on the ER; (3) the middle-sized to large river sites (5th-7th order) had greater influence than small to middle-sized streams (2nd-5th order) in the Grand River on overall GPP and ER. The general trend of GPP: ER ratio in tropical, subtropical, temperate, and global data approximately conforms to the predictions of the River Continuum Concept (RCC). However, the maximum ratio of GPP: ER in mid-reaches of river networks is not usually >1 as proposed in the RCC. There is a latitude and stream size shift phenomenon regarding where the peak ratio of GPP: ER occurs in each climate zone. The maximum GPP: ER ratio is higher at higher latitudes and occurs at higher order streams. The study of stream ecosystem metabolism can benefit from the addition of the second oxygen budget, δ18O-DO, in four ways: (1) it is better to use both DO and δ18O-DO budgets, rather than DO only, in sampling protocols with low temporal frequency but high spatial frequency; (2) the δ18O-DO time series data can provide relatively independent constraints on parameter estimation; (3) the addition of δ18O-DO in using two oxygen budgets to quantify metabolic rates provides a way, the cross-plot of δ18O-DO against fraction of DO saturation, to indicate trophic status of an aquatic ecosystem; and (4) the addition of δ18O-DO can provide an estimate of aR at the ecosystem level that can be used to understand factors affecting respiration.