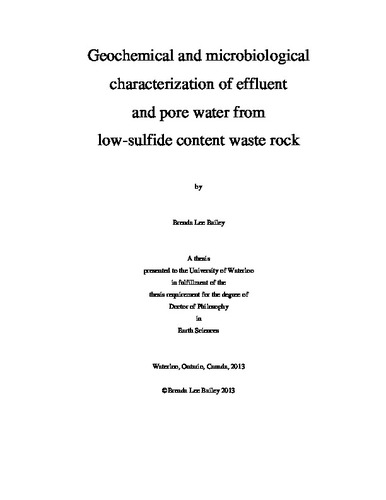 Laboratory and field studies were completed to characterize the geochemistry and microbiology of drainage emanating from low-S content waste-rock test piles at the Diavik Diamond Mine (Diavik) from 2007 through 2010. The potential use of small-scale laboratory humidity-cell experiments to predict the water quality from larger-scale field-based experiments also was examined. Waste rock at Diavik is segregated into three categories according to sulfide content: Type I (target concentration: < 0.04 wt. % S), Type II (target concentration: 0.04 to 0.08 wt. % S) and Type III (target concentration: > 0.08 wt. % S). Four high-density polyethylene tanks, 2 m in diameter by 2 m in height, were filled with and surrounded by waste rock (active zone lysimeters; AZLs) at the Diavik site to study the upper 2 m of the active zone within a waste-rock pile and to evaluate the quality of effluent released from waste rock with differing S contents (Type I AZLs: 0.014 wt. % S and Type III AZLs: 0.035 wt. % S). In addition, three waste-rock test piles also were constructed at Diavik, two uncovered test piles (Type I test pile: 0.035 wt. % S and Type III test pile: 0.053 wt. % S) and a third pile was constructed based on the mine-closure plan which consists of waste rock (Type III: 0.082 wt. % S) capped with a 1.5 m layer of till and a 3 m layer of Type I material (Covered test pile). Each test pile is underlain by a high-density polyethylene geomembrane that captures and directs water to outflow drains. Results show that the release and transport of blasting residuals could be used as a resident tracer, indicating the first flush of water through the AZLs and the test piles. Variations in concentrations of blasting residuals and the gradual rate of dissipation provide an indication of the heterogeneity of the distribution of blasting residuals and the relative contributions of water and solutes from different flow paths. As temperatures within the test piles increase in response to ambient air temperature increases, larger proportions of the test pile contributed to the outflow, and increased concentrations of blasting residuals were observed in waste-rock test pile effluent. Effluent from the Type I AZLs and test pile maintained near-neutral pH (ranged from 5.8 to 8) with concentrations of SO₄²⁻ < 500 mg L⁻¹. These results suggest that the near-neutral pH values were associated with the presence of carbonates in the waste rock and the lack of intense acid generation. As ambient air temperatures increased in spring and summer of each year, the measured pH in the Type III test-pile drainage decreased from near-neutral in May (pH 7.5) to acidic conditions by October (ranged from 5 to 4.5). As the pH in the Type III test pile decreased, concentrations of SO₄²⁻ and dissolved metals increased (e.g. SO₄²⁻ > 1500 mg L⁻¹) suggesting sulfide oxidation was occurring. Maximum concentrations of SO₄²⁻, Al, Zn, Ni, Co, and Cu were observed in 2009 during the first flush of water through the Type III test pile. A sequence of acid-neutralization reactions was inferred based on the water chemistry of the effluent derived from the Type III AZLs and waste-rock test pile. This acid-neutralization sequence is similar to those observed at other AMD impacted sites. A series of mineral dissolution-precipitation reactions controlled pH and metal mobility; carbonate-mineral dissolution consumed H⁺ generated from sulfide-mineral oxidation at near neutral pH and the dissolution of Al and Fe (oxy)hydroxides consumed H⁺ at pH < 5.0. The cover system on the Covered test pile dampened the effects of ambient air temperature on the internal temperatures within the core of the Covered test pile. As a result, the Covered test pile had a relatively steady change in flow rate, with decreased flow from June to August, which led to a slow but prolonged release of sulfide-mineral oxidation products, such as SO₄²⁻ and dissolved metals, including Ni, Co, Zn, Cd, and Cu, compared to the uncovered Type III test pile. The pH decreased in 2008 and remained low for the duration of the study, whereas the pH in the uncovered test pile was near-neutral at the beginning of each field season in May and decreased to < 4.2 by the end of the field season in November. The microbiological-community profiles observed in the AZLs and waste-rock test piles suggest typical AMD-related species were present in acidic effluent with elevated concentrations of metals, whereas typical soil microbes were present in effluent with a near-neutral pH and lower concentrations of SO₄²⁻ and dissolved metals. The Type III AZLs, Type III test pile, and Covered test pile maintained populations of acidophilic Fe-oxidizers, whereas, the Type I AZLs and Type I test pile maintained populations of neutrophilic S-oxidizers. Laboratory humidity-cell (1 kg) results were scaled up to estimate the water quality from the Type III AZLs (6 t) using measured physical and chemical parameters. The results suggested over-prediction of SO₄²⁻ and metal concentrations when low mean annual precipitation occurred, limiting flushing of predicted oxidation products. In subsequent years with higher mean annual precipitation oxidation products from previous years were liberated and resulted in the under prediction of SO₄²⁻ and metal concentrations. Additionally, Fe and Al were over-predicted because Fe and Al concentrations in the AZL effluent may be controlled by the solubility and formation of secondary minerals, such as Fe oxyhydroxides, jarosite, and goethite, which were not included in the scaling procedure.