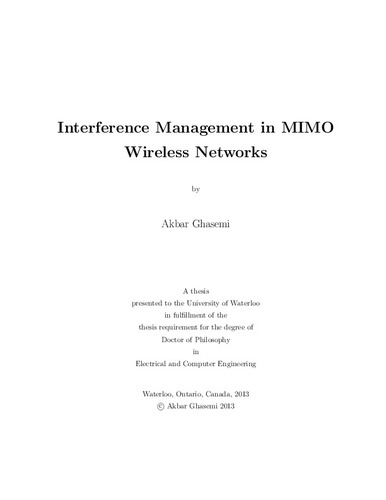 The scarce and overpopulated radio spectrum is going to present a major barrier to the growth and development of future wireless networks. As such, spectrum sharing seems to be inevitable to accommodate the exploding demand for high data rate applications. A major challenge to realizing the potential advantages of spectrum sharing is interference management. This thesis deals with interference management techniques in noncooperative networks. In specific, interference alignment is used as a powerful technique for interference management. We use the degrees of freedom (DoF) as the figure of merit to evaluate the performance improvement due to the interference management schemes. This dissertation is organized in two parts. In the first part, we consider the K-user multiple input multiple output (MIMO) Gaussian interference channel (IC) with M antennas at each transmitter and N antennas at each receiver. This channel models the interaction between K transmitter-receiver pairs sharing the same spectrum for data communication. It is assumed that the channel coefficients are constant and are available at all nodes prior to data transmission. A new cooperative upper-bound on the DoF of this channel is developed which outperforms the known bounds. Also, a new achievable transmission scheme is provided based on the idea of interference alignment. It is shown that the achievable DoF meets the upper-bound when the number of users is greater than a certain threshold, and thus it reveals the channel DoF. In the second part, we consider communication over MIMO interference and X channels in a fast fading environment. It is assumed that the transmitters obtain the channel state information (CSI) after a finite delay which is greater than the coherence time of the channel. In other words, the CSI at the transmitters becomes outdated prior to being exploited for the current transmission. New transmission schemes are proposed which exploit the knowledge of the past CSI at the transmitters to retrospectively align interference in the subsequent channel uses. The proposed transmission schemes offer DoF gain compared to having no CSI at transmitters. The achievable DoF results are the best known results for these channels. Simple cooperative upper-bounds are developed to prove the tightness of our achievable results for some network configurations.