The science of navigation: An analysis of behavioural differences between good and poor wayfinders 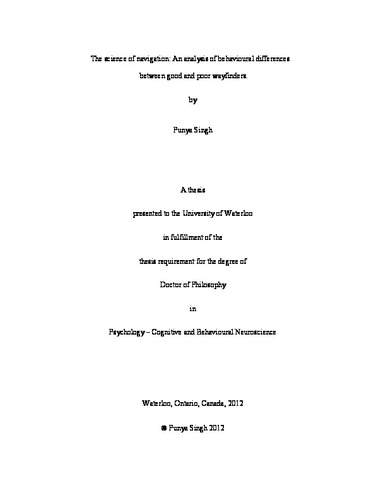 Everyday experience suggests that certain people can find their way to a destination easily, while others have considerable difficulty. This dissertation focused on gaining a greater understanding of navigational strategies that can facilitate or hinder an individual’s wayfinding performance. The first study was conducted to gain a broad idea of various factors that may influence navigational performance. Participants were guided through a building and then asked to find their way to a destination. It was found that good navigators made fewer errors in traversing a learned route than did poor navigators. They were also better at recognizing landmarks they had seen along the route, recalling the appropriate directions to be turned at each landmark, and at drawing the correct pathways on a map drawing task. A discriminant analysis revealed that the best predictor of determining navigational performance was the ability to form spatial relationships between landmarks. Results from the first study demonstrated that good navigators were better at determining spatial relationships between landmarks, but it did not address whether this was due to spatial relationships between distances and/or angles. The focus of the second study was to gain a greater understanding of the degree to which distance and angular information are used by good and poor navigators in determining spatial relationships between landmarks. Results showed that neither a distance nor an angular strategy were preferred in either group of wayfinders. An analysis of navigators initial heading angle error to a target location suggested that good wayfinders may be more efficient at finding their way because they appear to plan routes prior to initiating self-locomotion. Such pre-planning was confirmed by the fact that good wayfinders’ initial heading direction error was significantly less than in poor wayfinders. Poor wayfinders appear to head in a random direction and then attempt to determine target locations. The use of landmark information may be useful in certain contexts, but this may not always be the most efficient strategy. The last experiment was aimed at determining whether good navigators adjust strategies used (landmark vs. street), depending on contextual factors. Differences in strategies used were not found, however the results suggest that good navigators appear to be more skilled at navigating in environments rich with streets compared to poor wayfinders. Good and poor navigators were equally skilled at navigating in environments rich in landmarks. It appears that the ability to determine spatial relationships between landmarks is the strongest predictor of navigational performance compared to a wide range of other navigational skills.

Punya Singh (2013). The science of navigation: An analysis of behavioural differences between good and poor wayfinders. UWSpace. http://hdl.handle.net/10012/7396