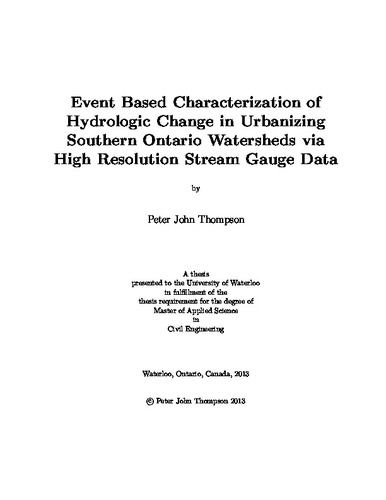 Tracking and quantifying hydrologic change in urbanizing watersheds is a complex problem which can vary spatially and temporally throughout the effective catchment area as change occurs. Hydromodification due to urbanization usually results in a larger peak event stream discharge, a change in typical event volume, a reduced lag time between rainfall and stream discharge events, and a more complex falling hydrograph. Recently extracted Environment Canada data have allowed the creation of a high resolution instantaneous stream flow dataset dating to the late 1960s for many Ontario gauge stations. Hydrometric data were obtained for fifteen urban and semi-urban catchments within Southern Ontario ranging in size from ~50km² to 300 km² with urbanized land use assemblages varying from <5% to 80%. Utilizing automated methods, each individual runoff event from the hydrographic record was identified and characterized. Temporal changes to urban land area, land use, and road length were quantified for each watershed from aerial photography spanning the period of record at approximately 8 year intervals allowing identified trends in event hydrograph parameters to be correlated quantitatively with the alteration of the catchment over time. <br> Increasing trends in event peak discharge were identified in all but one study catchment. Event volume was found to be consistently increasing in most of the urban watershed, while trends in event duration were observed but with no clear increasing or decreasing trend. The lack of consistent trends in the timing and distribution of flow during runoff events suggest that build-out, drainage network design, and stormwater management systems play differing roles in the neighbouring urban catchments. Changes to flood recurrence intervals through the period of urbanization were also investigated; peak magnitude of high frequency events is affected to a greater extent than low frequency or flood events. The relative change in return frequency distribution is not consistent between catchments, also the degree of alteration can differ between various recurrence intervals at a gauge. Peak discharge of some return periods appeared to decrease with urban development suggesting that the increased detention brought with urban stormwater management systems have effectively offset the increased runoff due to additional impervious area and improved drainage efficiency. A consistent relationship defining the change in geomorphically significant return periods (i.e. channel forming flow) with urbanization was identified in neighbouring urban catchments.