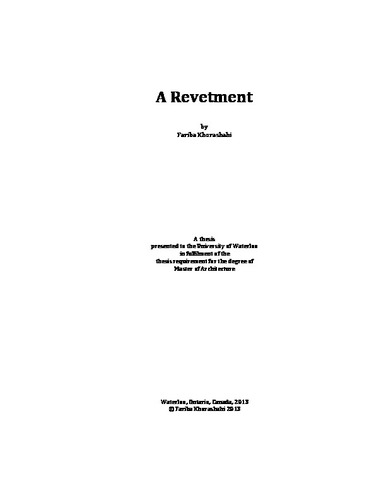 Historically, in Iran, ornament was an integral part of architecture and considered a valuable part of built form. However, in time the use of ornament suffered from the decline of figural articulation in architecture, and its status was diminished to mere decoration. In this process, ornament shifted from a pattern that was integrated with the structure to the role of revetment, from symbolic to commemorative, and from meaningfully designed to arbitrary. Investigating the changing modes of ornament to understand its significance and survival, this thesis looks at the decline of ornament from its role as a necessary structural component and/or an expressive element communicating the common values of a society into an arbitrary fragment celebrating the significant past. Traditional ornament was dependent not only on architecture but also on science, cosmology, culture, art, literature, as well as on society and its beliefs; therefore there was an intimate relationship between ornament and its context, and more importantly including the inhabitant or spectator who held those beliefs. However, today those close ties no longer exist and ornament is characterized variously as luxurious, decorative, and retrospective. This change is studied from various perspectives including historical forces, prehistory, traditional Persian cultural expression, the incursion of Islamic motifs and geometries, modernity and folk legend. To retrieve and reinstate the link between ornament and building as well as with the spectator, the thesis project engages the narrative content of ornament to re-establish these relationships. It tells its own story not in a literal way, but rather through the complex tale of the lovers in the famous historical poem (c.1190) by Nezami. The thesis narrates the epic romance of Farhad and Shirin within a love triangle with its superb pictorial cues for depiction. The story unfolds through a series of architectures and architectural representations and images. The theme and motifs of the poem imply transition (both spiritual and physical) that corresponds to the transformative mode of ornament par excellence. The ornamental manifestation of the depicted poem is applied in a subway station which is in itself the locus of transition in our contemporary lives. The architectural details of the design project are fragments of the selected episodes from the story.