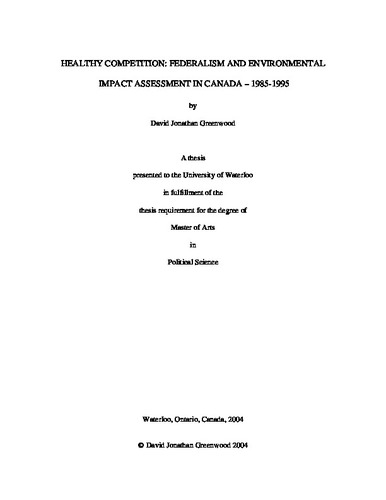 The effect of federalism on the development of public policy is a widely debated topic. In terms of environmental policy, this issue assumes greater importance because of the lack of clarity in the constitutional division of powers. It is the purpose of this research to examine environmental impact assessment (EIA) &mdash; one of the higher-profile aspects of environmental policy &mdash; in order to establish how intergovernmental relations in Canada have affected policy and process development in this area. It is hypothesized that unilateral federal action in this policy area contributes to a corresponding increase in the stringency of provincial EIA processes. To test this, a two-step analysis is adopted: first analyzing developments at both the federal and provincial levels from 1985-1995 &mdash; a period which witnessed exceptionally high levels of public concern for the environment and increased federal involvement in EIA &mdash; and second discussing key events and agreements which affected intergovernmental relations and determining whether these related to those developments identified. This research finds that greater federal involvement in EIA was a catalyst for some positive reform at the provincial level, although this result varied significantly between the provinces examined. Based on the evidence gathered, it is concluded that some form of intergovernmental collaboration and competition both have a place in the development of EIA policy and that neither should be pursued as an end in itself.