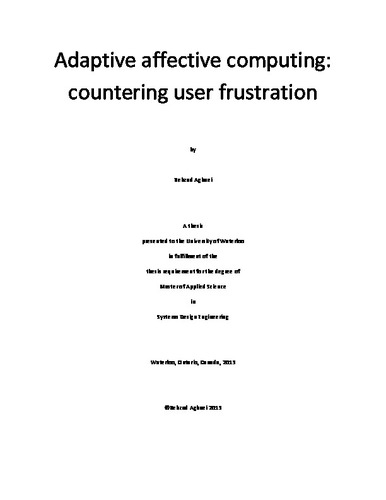 With the rise of mobile computing and an ever-growing variety of ubiquitous sensors, computers are becoming increasingly context-aware. A revolutionary step in this process that has seen much progress will be user-awareness: the ability of a computing device to infer its user's emotions. This research project attempts to study the effectiveness of enabling a computer to adapt its visual interface to counter user frustration. A two-group experiment was designed to engage participants in a goal-oriented task disguised as a simple usability study with a performance incentive. Five frustrating stimuli were triggered throughout a single 15-minute task in the form of complete system unresponsiveness or delay. An algorithm was implemented to attempt to detect sudden rises in user arousal measured via a skin conductance sensor. Following a successful detection, or otherwise a maximum of a 10-second delay, the application resumed responsiveness. In the control condition, participants were exposed to a “please wait” pop-up near the end of the delay whereas those in the adaption condition were exposed to an additional visual transition to a user interface with calming colours and larger touch targets. This proposed adaptive condition was hypothesized to reduce the recovery time associated with the frustration response. The experiment was successfully able to induce frustration (via measurable skin conductance responses) in the majority of trials. The mean recovery half-time of participants in the first trial adaptive condition was significantly longer than that of the control. This was attributed to a possibility of a large chromatic difference between the adaptive and control colour schemes, habituation and prediction, causal association of adaptation to the frustrating stimulus, as well as insufficient subtlety in the transition and visual look of the adaptive interface. The study produced findings and guidelines that will be crucial in the future design of adaptive affective user interfaces.