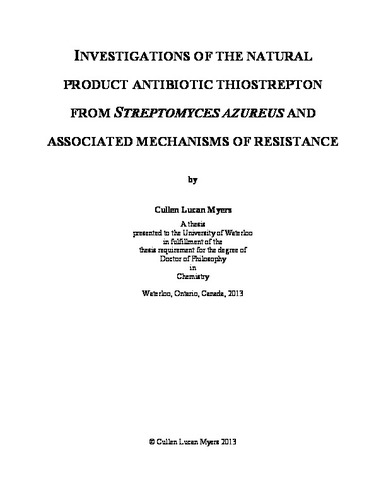 The persistence and propagation of bacterial antibiotic resistance presents significant challenges to the treatment of drug resistant bacteria with current antimicrobial chemotherapies, while a dearth in replacements for these drugs persists. The thiopeptide family of antibiotics may represent a potential source for new drugs and thiostrepton, the prototypical member of this antibiotic class, is the primary subject under study in this thesis. Using a facile semi-synthetic approach novel, regioselectively-modified thiostrepton derivatives with improved aqueous solubility were prepared. In vivo assessments found these derivatives to retain significant antibacterial ability which was determined by cell free assays to be due to the inhibition of protein synthesis. Moreover, structure-function studies for these derivatives highlighted structural elements of the thiostrepton molecule that are important for antibacterial activity. Organisms that produce thiostrepton become insensitive to the antibiotic by producing a resistance enzyme that transfers a methyl group from the co-factor S-adenosyl-L-methionine (AdoMet) to an adenosine residue at the thiostrepton binding site on 23S rRNA, thus preventing binding of the antibiotic. Extensive site-directed mutagenesis was performed on this enzyme to generate point mutations at key active site residues. Ensuing biochemical assays and co-factor binding studies on these variants identified amino acid residues in the active site that are essential to the formation of the AdoMet binding pocket and provided direct evidence for the involvement of an active site arginine in the catalytic mechanism of the enzyme. Certain bacteria that produce neither thiostrepton nor the resistance methyltransferase express the thiostrepton binding proteins TIP-AL and TIP-AS, that irreversibly bind to the antibiotic, thereby conferring resistance by sequestration. Here, it was found that the point mutation of the previously identified reactive amino acid in TIP-AS did not affect covalent binding to the antibiotic, which was immediately suggestive of a specific, high affinity non-covalent interaction. This was confirmed in binding studies using chemically synthesized thiostrepton derivatives. These studies further revealed structural features from thiostrepton important in this non-covalent interaction. Together, these results indicate that thiostrepton binding by TIP-AS begins with a specific non-covalent interaction, which is necessary to properly orient the thiostrepton molecule for covalent binding to the protein. Finally, the synthesis of a novel AdoMet analogue is reported. The methyl group of AdoMet was successfully replaced with a trifluoromethyl ketone moiety, however, the hydrated form (germinal diol) of this compound was found to predominate in solution. Nevertheless, the transfer of this trifluoroketone/ trifluoropropane diol group was demonstrated with the thiopurine methyltransferase.