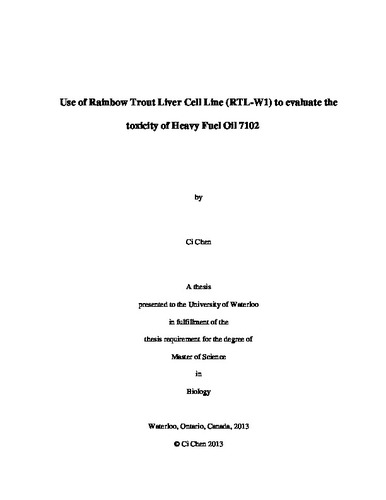 A rainbow trout liver cell line, RTL-W1, was used to evaluate the toxic potential of a heavy fuel oil (HFO) HFO 7102, and its fractions, which together with the HFO are referred to as the oil samples. The fractions were F2, F3, F3-1, F3-2 and F4 and had been prepared by low-temperature vacuum distillation by collaborators at Queen's University. For presentation to the cells, HFO 7102 and its fractions were made into High Energy-Chemically Enhanced Water Accommodated Fractions (HE-CEWAFs). The procedure for this involved adding Corexit 9500 to the oil samples, mixing them on a vortex, and letting the phases settle. The HE-CEWAFs were added to RTL-W1 cell cultures, and at various times afterwards cell viability and CYP1A induction were monitored. Cell viability was evaluated with two dyes, Alamar Blue, which monitors energy metabolism, and 5-carboxfluorescein diacetate acetoxymethyl ester (CFDA AM), which measures plasma membrane integrity. With both indicator dyes, Corexit 9500 was cytotoxic but the concentrations eliciting cytotoxicity varied with the cell culture media. In Leibovitz's L-15 with fetal bovine serum (FBS), which was the medium used for studying CYP1A induction, Corexit 9500 was only cytotoxic at concentrations of 0.1 % (v/v) and greater. For the oil samples, F3-2 at 1 mg/ml and F4 at 10 mg/ml, which were the highest testable concentrations for each, no loss of cell viability was observed over 24 h. The other oil samples were cytotoxic only at their highest testable concentrations, which ended being between 1 and 10 mg/ml. CYP1A induction was monitored in RTL-W1 as catalytic activity and as the level of CYP1A (P4501A) protein. The catalytic activity was assayed as 7-ethoxyresorufin o-deethylase (EROD) activity; the CYP1A protein level, by western blotting. The positive control was 2, 3,7,8-tetrachlorodibenzo-p-dioxin (TCDD), which strongly induced both EROD activity and CYP1A protein. Corexit 9500 by itself neither induced EROD activity nor CYP1A protein. All the oil samples induced both EROD activity and CYP1A protein. With both endpoints, the most potent fraction was F3; the least potent, F3-2. As the induction of CYP1A is associated with the development of blue sac disease (BSD) and mortality in early life stages of fish, the results suggest that HFO 7102 and its fractions have the potential to reduce recruitment of young into adult fish populations. CYP1A induction by F3 was studied further, again through EROD activity and western blotting. As the F3 concentration was increased, EROD activity increased but declined at high concentrations, whereas CYP1A protein continued to increase. This suggests the presence of compounds in F3 that at high concentrations inhibit the catalytic activity of CYP1A. When F3 was presented to RTL-W1 cultures together with TCDD, CYP1A protein was induced but not EROD activity. Again this suggests that F3 contains inhibitor(s) of CYP1A as well as inducers. When cultures were exposed to either F3 or TCDD for 24 h and then followed by western blotting for up to 6 days after F3 or TCDD removal, CYP1A levels declined in F3 cultures but not in TCDD cultures. This suggests that RTL-W1 were able to inactivate CYP1A inducer(s) in F3 through metabolism. Overall the results suggest that the pattern of CYP1A induction by F3, and by extension, HFO involves complex interactions between the many chemical components in these mixtures. Likely the most important chemicals are the polycyclic aromatic hydrocarbons (PAHs).