Remembering Faces in Different Places: The Influence of Context on Face Memory 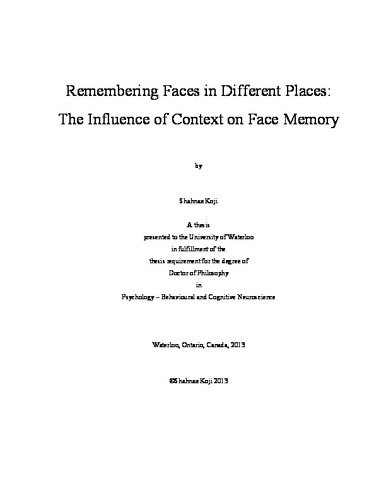 How context affects memory is the central focus of the six experiments making up this PhD thesis. In these experiments, pictures of faces were presented in an incidental encoding phase, paired with a variety of indoor and outdoor context scenes (e.g., park, supermarket, swimming pool), and a recognition memory test ensued in which faces were paired with either the same context (exact same context the face was paired with at encoding), switched context (a context that was presented at study, but not presented with that particular face), or new context (a context never before seen), relative to encoding. In Experiment 1, the importance of instructions at encoding was examined by manipulating instructions to either actively link or passively view the face and context at encoding. Maintaining the same context as at encoding reliably enhanced overall detection, and recollection, of studied faces relative to a new context, replicating the known context reinstatement (CR) effect. There was also a reliable memory benefit for faces paired at test with the same relative to a switched context, indicating a context specificity (CS) effect on memory. Encoding instructions to either actively link, or passively view, face-context pairs during encoding did not influence the presence or magnitude of the CR or CS effects, suggesting that linking of target + context may occur spontaneously. In Experiment 2, dividing attention did not influence CR, but did eliminate the CS effect on overall memory. Findings suggest that the general boost to memory from reinstating an old relative to a totally new context at test is robust, though linking specific contexts to targets is hampered when attention is limited during encoding. In Experiments 3 and 4, familiarity of the face to the observer interacted with context effects. In Experiment 3, face familiarity was manipulated by presenting famous versus non-famous faces during encoding and an attenuated CR effect was observed for famous relative to non-famous (unfamiliar) faces, though CS remained. In Experiment 4, degree of familiarity was controlled by pre-exposing the study faces 0, 1, 3, or 10 times prior to the study phase. After just one pre-exposure to an unfamiliar face, the CR effect was reduced. Experiment 5 examined whether distinctive faces were less susceptible to context effects relative to similarly familiar, but less distinctive, faces. CR and CS effects were predicted for out-group faces (Caucasian faces for Asian participants and Asian faces for Caucasian participants), and a reduction in both CR and CS for in-group faces (Caucasian faces for Caucasian participants and Asian faces for Asian participants). Results indicated no difference in CR or CS across the conditions, suggesting that distinctiveness may not be an important factor in mediating context effects. The final experiment examined how the expectancy of a face + context pairing influenced CR and CS effects, even when the target face was familiar. There were robust CR and CS effects for faces when these were repeatedly paired with a specific context during study, but a loss of both effects when faces were paired with varying contexts during study. Results extend our current knowledge regarding the role of context in memory and supports memory models that suggest context information presented at test acts as a cue that uniquely specifies a particular target.