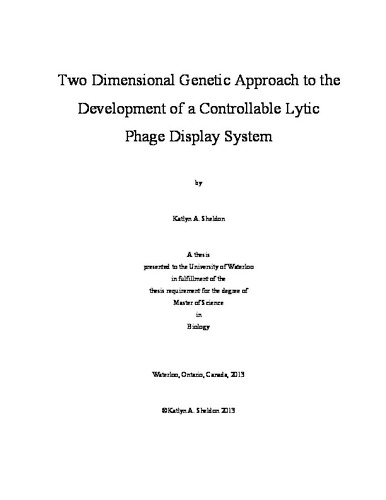 Bacteriophage Lambda (λ) has played a historical role as an essential model contributing to our current understanding of molecular genetics. Lambda’s major capsid protein “gpD” occurs on each capsid at 405 to 420 copies per phage in homotrimeric form and functions to stabilize the head and likely to compact the genomic DNA. The interesting conformation of this protein allows for its exploitation through the genetic fusion of peptides or proteins to either the amino or carboxy terminal end of gpD, while retaining phage assembly functionality and viability. The lytic nature of λ and the conformation of gpD in capsid assembly makes this display system superior to other display options. Despite previous reports of λ as a phage display candidate, decorative control of the phage remains an elusive concept. The primary goal of this study was to design and construct a highly controllable head decoration system governed by two genetic conditional regulation systems; plasmid-mediated temperature sensitive repressor expression and bacterial conditional amber mutation suppression. The historical λ Dam15 conditional allele results in a truncated gpD fragment when translated in nonsuppressor, wild-type E. coli cells, resulting in unassembled, nonviable progeny. I sequenced the Dam15 allele, identifying an amber (UAG) translational stop at the 68th codon. Employing this mutant in combination with a newly created isogenic cellular background utilizing the amber suppressors SupD (Serine), SupE (Glutamine), SupF (Tyrosine) and Sup— (wild type), we sought to control the level of incorporation of undecorated gpD products. As a second dimension, I constructed two separate temperature-inducile plasmids whereby expression of either D or D::eGFP was governed by the λ strong λ CI[Ts]857 temperature-sensitive repressor and expressed from the λ PL strong promoter. Our aim was to measure the decoration of the λ capsid by a D::gfp fusion under varying conditions regulated by both temperature and presence of suppression. This was achieved utilizing this controllable system, enabling the measurement of a variable number of fusions per phage based on diverse genetic and physical environments without significantly compromising phage viability. Surprisingly, both SupE and SupF showed similar levels of Dam15 suppression, even though sequencing data indicated that only SupE could restore the native gpD sequence at amino acid 68 (Q). In contrast, SupD (S), conferred very weak levels of suppression, but imparted an environment for very high decoration of gpD::eGFP per capsid, even at lower (repressed) temperatures. The presence of albeit few wild-type gpD molecules allowed for an even greater display than that of the perceived “100%” decoration scenario provided by the nonsuppressor strain. It appears that the lack of wild-type gpD does not allow for the space required to display the maximum number of fusions and in turn creates an environment that affects both phage assembly and therefore phage viability. Finally, the use of Western blotting, confirmed the presence of gpD::eGFP fusion decoration by employing a polyclonal anti-eGFP antibody. The significance of this work relates to the unique structure of λ’s capsid and its ability to exploit gpD in the design of controlled expression, which is guiding future research examining the fusion of different therapeutic peptides and proteins. Furthermore this approach has important implications specifically for the design of novel vaccines and delivery vehicles for targeted gene therapy in which steric hindrance and avidity are important concerns. The execution of this project employed basic bacterial genetics, phage biology and molecular biology techniques in the construction of bacterial strains and plasmids and the characterization of the phage display system.