Structural and geochronological investigation of the southern Alexander terrane in the vicinity of Porcher Island, northwestern British Columbia 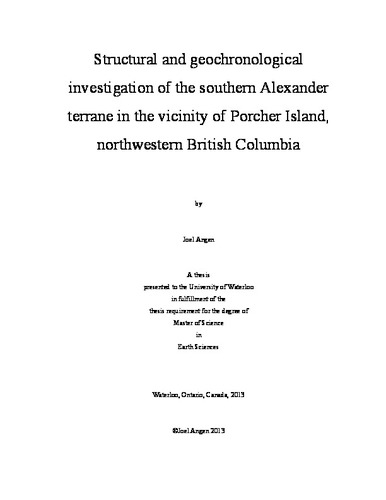 The Alexander terrane is an allochthonous terrane within the North American Cordillera. New structural mapping and geochronology within the southern Alexander terrane in the vicinity of Porcher Island provides evidence for two major tectonic events. The oldest is Late Silurian to Early Devonian magmatism and deformation assigned to the Klakas orogeny. The area has subsequently been affected by mid-Cretaceous conjugate shear zones potentially associated with tectonic escape. Northwest-striking sinistral shear zones characterize mid-Cretaceous deformation in the western Coast Belt south of Prince Rupert in north coastal British Columbia. Structurally focused mapping and geochronology has revealed a component of lateral extension to this deformation. General flow characteristics of the shear zones are identified by comparison of fabric patterns to published models for fabric development in shear zones. U-Pb ages from synkinematic dykes constrain motion on northwest-striking sinistral transpressional shear zones, including the Useless, Barrett and Salt Lagoon shear zones, to ca. 104 – 96 Ma, and dextral transpression on the north-striking Telegraph Passage shear zone to ca. 97.6 ± 0.2 Ma. The geometry, kinematics, and coeval nature of these shear zones suggests that they formed in part as a ductile conjugate set. The presence of similarly-oriented conjugate shear bands in the apex zone between sinistral and dextral shear zones further reinforces this interpretation. The orientation of these conjugate sets indicates a component of north-northwest east-southeast extension. The conjugate shear zones merge together into the Grenville Channel shear zone, a sinistral transpressional shear zone with high strike-parallel stretch. A U-Pb age of 103 ± 32 Ma from a synkinematic dyke in the Grenville Channel shear zone coincides with a previously published Lu-Hf age of 102.6 ± 3.7 Ma on synkinematic garnet. Overall, structural and geochronological data from Porcher Island and surrounding area in north coastal British Columbia indicate that mid-Cretaceous deformation was characterized by ENE-WSW (orogen normal) shortening and NNW-SSE (orogen parallel) extension. This local strain regime is consistent with large-scale mid-Cretaceous tectonic escape as proposed for the northern Cordillera at that time, expressed in coeval sinistral faulting in the Coast Belt and dextral faulting in the northern Omineca belt. The Late Silurian to Early Devonian Ogden Channel complex is a mafic to intermediate metaplutonic-metamorphic complex within the southern Alexander terrane on southern Porcher Island and adjacent Pitt Island in north coastal British Columbia. Lithological characteristics of the complex suggest that it represents the mid-crustal roots of a volcanic arc. An age of 413.3 ± 2.5 Ma from a comparatively weakly deformed quartz diorite dyke indicates that the synkinematic Ogden Channel complex is at least in part Early Devonian in age, corresponding to the Klakas orogeny that affected the Alexander terrane in southeast Alaska. Crosscutting relationships indicate that individual intrusions within the Ogden Channel complex were emplaced syn- to post-kinematically with respect to southwest-vergent sinistral reverse deformation (present coordinates). The structural and lithological characteristics of the Ogden Channel complex are consistent with the interpretation that this part of the Alexander terrane was located in the upper plate of a northeast-dipping subduction zone, which culminated in the Klakas orogeny.