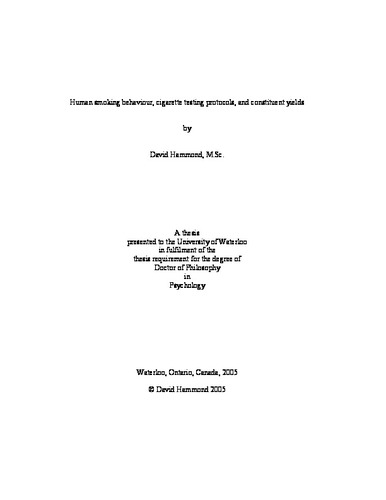 The issue of how to test and ultimately regulate tobacco products represents a critical challenge for the public health community. Although the current international testing regime for conventional cigarettes is widely acknowledged to be seriously flawed, there is a lack of data to guide potential alternatives, particularly in the area of human puffing behaviour. The current study sought to: 1) collect naturalistic measures of smoking behaviour, 2) examine the extent to which levels of tar, nicotine, and carbon monoxide from each of five testing protocols were associated with measures of nicotine uptake among smokers, and 3) examine the validity of self-report measures of smoking behaviour. These questions were examined through two different studies. First, a field study of smoking behaviour was conducted with 59 adult smokers, who used a portable device to measure smoking topography over the course of 3 one-week trials. Participants were asked to smoke their usual ?regular-yield? brand through the device for Trial 1 and again, 6 weeks later, at Trial 2. Half the subjects were then randomly assigned to smoke a ?low-yield? brand for Trial 3. The smoke intake and constituent yield of each brand was then tested under five testing protocols: ISO, Massachusetts, Canadian, a Compensatory protocol, and a Human Mimic regime. Participants also completed self-report measures of puffing behaviour at recruitment and immediately following each of the three one-week smoking trials. Several of these self-report measures were subsequently included in the Waves 2 and 3 of the International Tobacco Control Policy Evaluation (ITC) Survey?an international cohort survey of adult smokers from Canada, Australia, the US, and the UK. <br /><br /> The results of the field study indicate a high degree of stability in puffing behaviour within the same smoker over time, but considerable variability between smokers, including those smoking the same brand. Puffing behaviour was strongly associated with cotinine levels, particularly when included in an interaction term with cigarettes per day (<em>Part r</em> = . 50, <em>p</em><. 001). Smokers who were switched to a ?low-yield? cigarette increased their total smoke intake per cigarette by 40% (<em>p</em>=. 007), with no significant change in their in salivary cotinine levels. <br /><br /> The results indicate systematic differences between human puffing behaviour and the puffing regimes used by machine testing protocols. The puffing behaviour observed among participants during the one-week smoking trials was significantly more intense than the puffing parameters of the ISO and Compensatory testing regimes. When cigarette brands were machine tested using participants? actual puffing behaviour, the results suggest that participants ingested two to four times the level of tar, nicotine, and carbon monoxide indicated by the ISO regime, and twice the amounts generated by the Compensatory regime for ?regular-yield? brands. The Canadian and Massachusetts regimes produced yields much closer to the ?Human Mimic? yields, although nowhere near a maximum or intense standard, as they were designed to do. Only the nicotine yields from the Human Mimic regime were correlated with measures of nicotine uptake among smokers, and only moderately so (<em>Part r</em> = . 31, <em>p</em>=. 02). <br /><br /> Self-report measures of puffing behaviour collected during the field study were moderately correlated with physiological measures of puffing and exposure. Self-report measures of puff depth and puff number showed some promise as predictors of salivary cotinine, although the results are characterized by inconsistencies across models. The self-report measures included in the ITC survey were only weakly associated with age and cigarettes per day, with modest between-country differences. <br /><br /> Overall, this research highlights the importance of puffing behaviour as a determinant of smoke exposure, and provides strong evidence of compensatory smoking for ?low-yield? brands. The findings also highlight the variability in human smoking behaviour and the limitations associated with machine testing protocols. Perhaps most important, the findings underscore the immediate need to revise the ISO protocol, which systematically underestimates smoking behaviour among humans and exaggerates differences between cigarette brands.