Decolonizing Architecture: Vieques as a Symbol for a Post-Colonized Puerto Rico 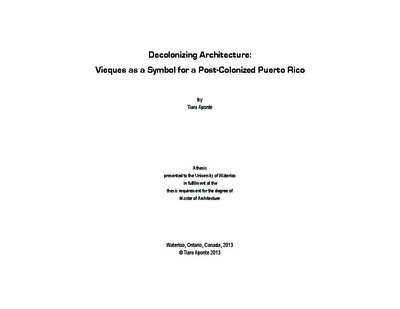 Puerto Rico has been a United States territory since 1898. Since then, our identity and culture has been threatened by the impositions of the colonizer. The so-called “identity crisis” caused by the relationship with the U.S. government, is felt not only at a personal level, but also in our economy, politics and sociability. With the theme Decolonizing Architecture I explore our condition of colony, the struggles of the Puerto Rican people in favor of our emancipation and the role of architecture and memory to transcend our insular circumstance. My thesis focuses on the island of Vieques, a Puerto Rican Municipality that was invaded in 1941 by the U.S. Navy. The navy expropriated 2/3 of the island. The East was used as a weapons training facility and the West for ammunition storage. The Viequense community, of approximately 10,000 inhabitants, was left in the middle of training zones for war. In 2003, after more than five decades of relentless bombings and the many protests and civil disobedience acts against it from the local community, Puerto Ricans from the main island and in the diaspora, the navy withdrew from Vieques. Currently the previous Live Impact Area on the East side of Vieques is inaccessible due to cleanup from contamination but the land can be used to provide a renewable source of energy that would benefit the municipality. The intervention in the West is located on the former Naval Ammunition Storage Detachment where hundreds of abandoned bunkers are located. These bunkers will be rehabilitated to promote eco-tourism, to provide a space in memory of those who have died at the hands of the navy, and to commemorate Vieques’ triumph. The design proposal is my approach on how to return the land to the community. With this thesis I intend to recognize the collective memory of a people who are still struggling to control their destiny. We should never forget how the Viequenses got together and fought to defend their land and their dignity against the most powerful military in the world; in hopes that the rest of Puerto Ricans can someday understand Vieques as the beggining of the end of colonization.