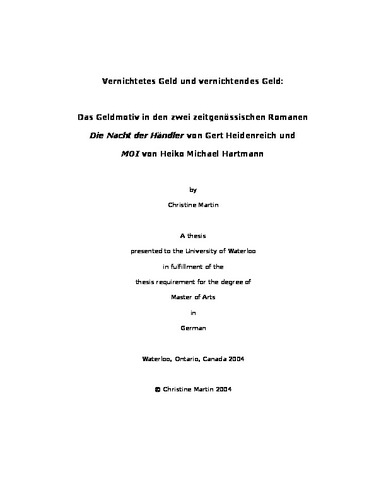 The present work deals with the motif of money in contemporary German literature, taking as examples the two novels <i>Die Nacht der Händler</i> (1995) by Gert Heidenreich and <i>MOI</i> by Heiko Michael Hartmann (1997). This motif is investigated through an analysis based mainly on four monetary theories: Karl Marx's <i>Das Kapital</i>, Georg Simmel's <i>Philosophie des Geldes</i>, Niklas Luhmann's <i>Die Wirtschaft der Gesellschaft</i> and Jochen Hörisch's <i>Kopf oder Zahl. Die Poesie des Geldes</i>. Additionally, theorists such as Jean Baudrillard and Marshall McLuhan will be included in the work. Both relatively recent narratives choose to depict money as subject to dysfunction, and by this means show the dependence of western society on the monetary system. Following Jochen Hörisch's argument, this thesis shows that money is the leading medium of modern times: without it, the entire social system would collapse. Through its failure to function as expected, it becomes obvious that money (an artificial human invention) turns against its creator, since money is not only responsible for how people perceive reality but is also the determining factor for human conduct in western society. In depicting this dysfunction, both novels deal with money in its most prominent recent forms - in Heidenreich's novel, virtual money; in Hartmann's, the Euro. These new money form has a big impact on society, as the novels show. As <i>Die Nacht der Händler</i> demonstrates, money is nowadays the reality-generating medium, which has become congruent with the real reality (as far as it is generally perceivable). Money obscures reality; because it duplicates the world and yet remains an abstract medium, this doubling causes people to become estranged from the world, its objects and also themselves. This process culminates in the development of virtual money, which reduces everything to a binary code of zeroes and ones. The growing virtualization of other media further amplifies people's alienation. Because money is the ruling medium in our society, humanity is in the grasp of the "Midas touch," as described by Marshall McLuhan. Money encodes everything, even human conduct. According to Georg Simmel, in a monetarily-ruled society lack of character, recklessness and greediness increase, since this is what money requires. In a rationalized society one can only be successful who acts in selfish interests. The MOI-disease passed on by infected currency in Hartmann's novel is an ego-disease, because humans have become increasingly self-centered since the invention of money. Together with the new media, money causes the diminishment and brutalization of human relations, whereby the individual becomes more and more an object of money-ruled processes, as Hartmann in particular shows. Money thus destroys the subject. This thesis also shows, on the basis of the two novels, how money in modern times has come to replace the older medium of religion, as Jochen Hörisch has argued. Money creates an alliance with the new electronic media, thus strengthening its reality-generating abilities. It is no longer religion that is responsible for giving meaning to our lives, but rather this new alliance. Both novels demand a return to cultural roots: Heidenreich does so by opposing the counting (<i>Zahlen/Zählen</i>) in modern society with the old medium of narration (<i>Erzählen</i>). Hartmann, on the other hand, comes to the conclusion that real knowledge can only be reached by religion and philosophy, since they show the way to one's own real self.