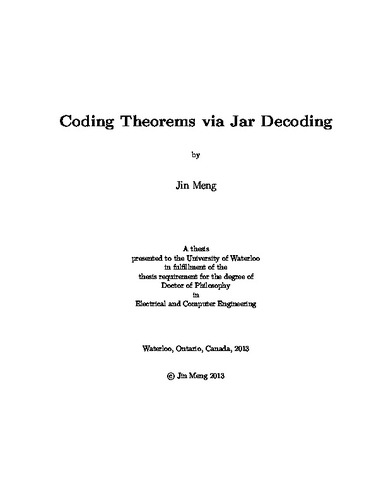 In the development of digital communication and information theory, every channel decoding rule has resulted in a revolution at the time when it was invented. In the area of information theory, early channel coding theorems were established mainly by maximum likelihood decoding, while the arrival of typical sequence decoding signaled the era of multi-user information theory, in which achievability proof became simple and intuitive. Practical channel code design, on the other hand, was based on minimum distance decoding at the early stage. The invention of belief propagation decoding with soft input and soft output, leading to the birth of turbo codes and low-density-parity check (LDPC) codes which are indispensable coding techniques in current communication systems, changed the whole research area so dramatically that people started to use the term "modern coding theory'' to refer to the research based on this decoding rule. In this thesis, we propose a new decoding rule, dubbed jar decoding, which would be expected to bring some new thoughts to both the code performance analysis and the code design. Given any channel with input alphabet X and output alphabet Y, jar decoding rule can be simply expressed as follows: upon receiving the channel output y^n ∈ Y^n, the decoder first forms a set (called a jar) of sequences x^n ∈ X^n considered to be close to y^n and pick any codeword (if any) inside this jar as the decoding output. The way how the decoder forms the jar is defined independently with the actual channel code and even the channel statistics in certain cases. Under this jar decoding, various coding theorems are proved in this thesis. First of all, focusing on the word error probability, jar decoding is shown to be near optimal by the achievabilities proved via jar decoding and the converses proved via a proof technique, dubbed the outer mirror image of jar, which is also quite related to jar decoding. Then a Taylor-type expansion of optimal channel coding rate with finite block length is discovered by combining those achievability and converse theorems, and it is demonstrated that jar decoding is optimal up to the second order in this Taylor-type expansion. Flexibility of jar decoding is then illustrated by proving LDPC coding theorems via jar decoding, where the bit error probability is concerned. And finally, we consider a coding scenario, called interactive encoding and decoding, and show that jar decoding can be also used to prove coding theorems and guide the code design in the scenario of two-way communication.