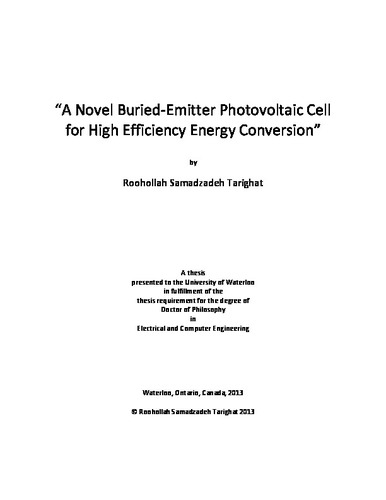 To address the commonly poor short wavelength response of the conventional solar cell structure which consists of a highly doped thin emitter layer on top of a thicker and less doped base, the novel concept of the Buried-Windowed-Emitter is introduced. This new solar cell structure makes use of a high quality semiconductor layer on top of the traditionally made highly doped emitter and greatly enhances the spectral response of the solar cell by giving the superficially generated carriers a higher chance of collection at the junction. In the proposed BWE structure the emitter is windowed in order to electrically connect the top layer to the base for current collection. The efficacy of the proposed novel device is proven by computer aided device simulations using the available device simulation tools such as MEDICI. The results of simulation show that the proposed novel Buried-Windowed-Emitter solar cell will not only improve the short wavelength spectral response of the overall cell as expected, but also will boost the spectral efficiency for all the wavelengths. Another exciting conclusion from the results of the computer simulation of the BWE solar cell is that the minority carrier lifetime in the top layer does not need to be very high for a superb performance and values as low as 1µs can still boost the short circuit current of the cell to values close to the theoretical limit of the photo-current collectable by a silicon solar cell. This is indeed a good news for manufacturability of this device as it should be practically feasible to achieve epitaxial films with minority carrier lifetime in this range. In order to increase the understanding about the rather complex structure of the proposed Buried-Windowed-Emitter solar cell, an analytical circuit level model, similar to the case of the standard solar cell, is developed for the proposed device. The developed analytical model helps to understand the importance of the main design parameters such as the dimensions of the pattern of the windowed emitter. On the path to fabricate the proposed BWE solar cell, great deal of work is done on the development of a low temperature (<300°C) epitaxial silicon technology using the benefits of Plasma Enhanced Chemical Vapor Deposition (PECVD). Highly doped epitaxial silicon layers of up to around 1µm thickness are achieved with sheet resistivity as low as 7Ω/sq which is much lower than what is reposted in the literature in similar deposition conditions. Intrinsic, phosphorous doped n-type and boron doped p-type epitaxial films have been developed on silicon substrates. Measurement of reflection spectra of the deposited epitaxial films is proposed as a fast, non destructive and process-integrate-able method to assess the crystalline quality of the epitaxial films. Effects of higher temperature post deposition annealing have been studied on the develop epitaxial films A full technology is developed for the fabrication of the proposed novel solar cells. Photo-masks are designed to create 10 different architectures for the design of the windowed emitter in the BWE cell. All the steps taken in the successful fabrication of the novel BWE cells are presented in detail and the relevant findings are discussed and proposed as future research topics. Three kinds of cells are fabricated using the developed technology to separately study the effects of partial coverage of the windowed emitter, the optical performance of the developed epitaxial silicon films and the performance and manufacturability of the novel BWE solar cell The results show that the concept of windowed-emitter by itself (even without the top layer) is capable of enhancing the performance of the solar cell when compared to a standard design. It also promises high conversion efficiency for the BWE solar cell in case a high quality top layer can be deposited on top of the windowed emitter. The results further reveal the lower than expected quality of the low temperature epitaxial films despite the indication of their full crystallinity through other analyses. Use of the epitaxial films as the emitter of the solar cell is proposed as a direct and effective method of studying the photovoltaic performance of the low temperature epitaxial films. Further development of the epitaxial technology will lead to feasibility of a BWE solar cell with very high photovoltaic performance.