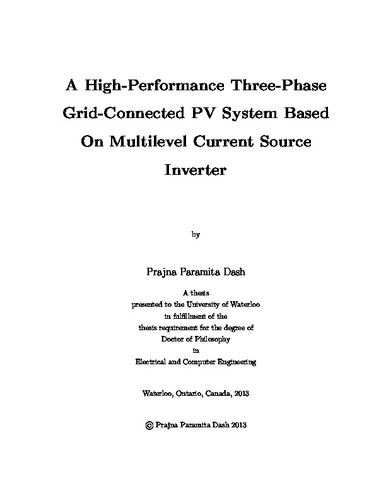 Current Source Inverter (CSI) topology is gaining acceptance as a competitive alternative for grid interface of renewable energy systems due to its unique and advantageous features. Merits of CSI over the more popular Voltage Source Inverter (VSI) topology have been elaborated on by a number of researchers. However, there is a dearth of quality work in modeling and control of CSI topology interfacing renewable energy resources to the grid. To enrich the study focussing on application of CSI for renewable energy interface, this thesis develops a multilevel structure based on CSI for three-phase grid-connected Photovoltaic (PV) application. In the first part of research, a single-stage CSI interfacing to PV array is developed. The CSI-based PV system is equipped with Maximum Power Point Tracker (MPPT), DC-link current controller, and AC-side current controller. To eliminate the nonlinearity introduced by the PV array, a feed-forward control is introduced in the DC-link current controller. The AC-side current controller is responsible for maintaining unity power factor at the Point of Common Coupling (PCC). To verify the performance of the developed CSI-based PV system, a number of simulation studies are carried out in PSCAD/EMTDC environment. To illustrate the performance of the CSI-based PV system during transients on the grid side, simulation studies are carried out for four kinds of faults. Results obtained from fault studies are highly in favor of CSI topology and provide illustrative evidence for short-circuit current protection capability of the CSI. On the other hand, the VSI-based PV system performs poorly when subjected to similar grid transients. To extend the research on CSI-based PV system further, a multilevel structure based on CSI is developed. The multilevel structure is a parallel combination of $n$ CSI units and capable of producing $2n+1$ levels of current at the terminal of the inverter. Each unit in the multilevel structure has its own MPPT, DC-link current controller. However, on the AC-side a combined current controller is proposed. The design results in a high power rating with reduced number of filters, sensors and controllers. The developed multilevel structure can operate with PV arrays exposed to equal and unequal insolation level. However, when the PV arrays are operating under unequal insolation level, low order harmonics are generated in the sinusoidal current that is injected into the grid. Elimination of these harmonics is performed by implementing a modified control strategy in stationary reference frame that corresponds to the harmonic component that needs to be minimized. The modified control strategy operates in coordination with the existing DC-side and AC-side current controllers, and MPPTs. Therefore, real-time suppression of current harmonics can be ensured. Performance of the multilevel structure is verified by different transient studies.