Nuna-Regionalism: A Vision of Iqaluit Regionalism 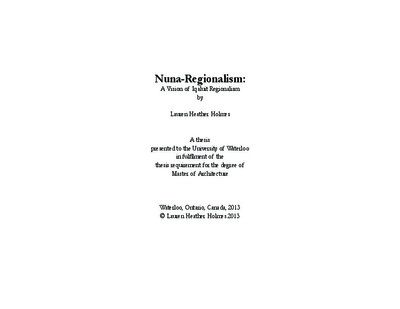 The recent demographic shift, sparked by a combination of political and environmental forces, towards urbanization in the Canadian Arctic has uprooted a tie to the land that largely defines Inuit cultural identity. The transition of Iqaluit from a seasonal camp to the capital city of Nunavut has been swift, forcing residents to find their place between tradition and modernity, land and city. Though the populations of Nunavut communities are predominantly Inuit, many Inuit maintain a rather negative view of urban spaces in the Arctic, identifying them as places where Inuit values and practices have been eclipsed by Qallunaat (“white people”) values. While Inuit identity weighs heavily on a connection to the land, the spatial organization of Iqaluit ignores the opportunistic proximity of the urban centre to Frobisher Bay. Similarly, individual buildings often are designed as though sunlight, wind, and snow did not exist. This follows a historical trend of poor and imported design in the Canadian Arctic; design which does not properly serve the needs and aspirations of its inhabitants. Architecture which fails to serve Iqaluit’s distinctiveness undermines the ambitions of the territory. The creation of Nunavut in 1999 was to be an expression of Inuit self-determination, yet the territory is unable to meet the needs of its 33,000 inhabitants. Nunavut remains fiscally dependent, with 92% of its annual revenue coming from the federal government. Due to a lack of infrastructure and training opportunities, agency for social and economic growth remains weak. By leveraging expanding natural resource based industries, Iqalungmiut – the people of Iqaluit – have the potential to shape a more economically autonomous future using their cultural and environmental resources. Understanding how infrastructure can support the visions Iqalungmiut maintain for their community is crucial in a place where shortsighted developments threaten a unique way of life. The thesis proposes an urban facility in Iqaluit to support and promote what is currently a primarily informal subsistence economy. Animal processing, food and craft production, and training are accommodated in this new building typology. The proposal, while enabling Iqalungmiut to participate more actively in the economy, also applies regional cultural and environmental processes in an attempt to avoid some of the mistakes of the past. A congruent soft system infrastructure is proposed to aid in the collection of raw materials across the region. Taking cue from Iqaluit’s vernacular, mobile structures respond to the seasonal rhythms of Nuna – the land – and its people. The design harnesses traditional activities through a range of economic scales to find new spatial and programmatic models for a place in transition.