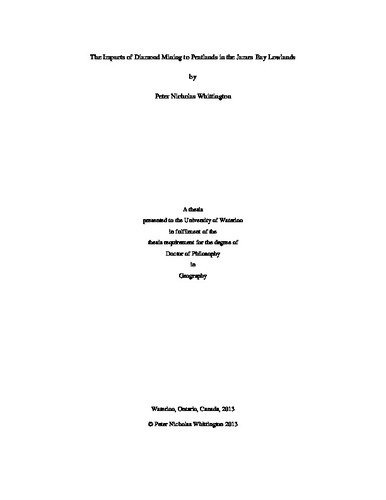 Approximately 7000 to 8000 years ago when Hudson Bay became ice-free the Tyrrell Sea flooded the Hudson basin and deposited fine grained marine sediments overlaying the previous glacial tills. Coincident with the ablation of the ice sheet isostatic rebound occurred causing regression of the Tyrell Sea and the emergence of a flat, relatively impermeable surface that would eventually host one of the world’s largest wetlands: the Hudson Bay Lowlands. The low permeability marine sediments and low regional slope reduced recharge and runoff, respectively, so that basal tidal marshes were established, and with isostatic up lift were eventually replaced by swamp forests and then forested and non-forested bogs. Recent discovery of kimberlite (diamondiferous) pipes in an area of the lowlands has led the development of an open-pit diamond mine which requires dewatering of the regional aquifer. Dewatering is depressurizing the surrounding Silurian bedrock that underlies the marine sediments. It was hypothesized that these marine sediments would act as a confining layer, isolating the overlying peatlands from the regional bedrock aquifer. We tested this hypothesis by instrumenting a 1.5 km long transect located within the zone of the mine’s influence that crossed various bogs and fens overlying these marine sediments, and was anchored at both ends by bedrock outcrops (bioherms), which represented areas of no marine sediment. Along this transect wells and piezometers were installed within the peat profile and upper marine sediments and bedrock to determine changes in water table and hydraulic head. The exposed bedrock outcrops (bioherms) did act as local drainage nodes, however, this effect was limited to ~30 m, beyond which water tables and hydraulic heads were similar to a control site located 25 km away. However, within this 30 m zone daily losses of water by the enhanced recharge often exceeded those of evapotranspiration (~3mm/day) representing a major local loss of water to the system. It is the distance to bedrock, rather than distance to bioherm, that determines strength of recharge. In areas of thinner marine sediments the daily fluxes were similar (but less) than those in the areas directly surrounding the bioherms, despite being 100s of meters away from the bioherms. The stratigraphy surrounding the bioherms lead to complicated flow regimes with higher conductivity layers (e.g., sands) circumventing the lower permeability marine sediments which may help extend the effect of the bioherms beyond the 30 m distance. The drying peat around the bioherms, and the elevated nature of the bioherms in a flat landscape, put them at increased risk for lighting strikes and thus fires; however, very little viable fuel exists in the peatlands around the bioherms and any fires that might occur would be confined to the bioherm and not spread into the surrounding peatland. Overall, at least within the first 5 years of aquifer dewatering, seasonal weather played the dominant role in affecting the hydrology of the peatlands; a heavy snow pack and cool, wet summer can mask, or at least minimize the effects of aquifer dewatering.

Peter Whittington (2013). The Impacts of Diamond Mining to Peatlands in the James Bay Lowlands. UWSpace. http://hdl.handle.net/10012/7352